I Once Went to Napa Recently, I went to Napa with my mother to visit my friends, Neil and Annaleis. We traveled from Phoenix to Napa by car, which took us about 12 hours. It’s a drive that we have made before, when we visited my best friend Khanh in Sunnyvale and toured San Francisco. This time we went a bit further North, to the beautiful Napa Valley.
Beautiful is almost an understatement when you factor in the fantastic weather that we had the entire duration of the trip. It was a much needed relief from the still hot temperatures of Phoenix. The air was clean and fresh in the rolling hills of California’s famous wine country. It has been a goal to visit the area for some time, especially for my mother who enjoys wine much more than I do. So it did not take much convincing when I suggested that we go, and without needing a hotel thanks to the generosity of Neil and Annaleis, how could she refuse?
I first got to know Neil and Annaleis through their podcast, Dark Angels and Pretty Freaks. We chatted for years and were finally able to meet in person through this trip. Some people may think it an odd situation, meeting people, whom you only knew online, in person for the first time. But I’m no stranger to meeting people, whom share similar interests, through the internet and becoming fast friends. It’s not a strange thing anymore for adults to meet people online and develop friendly relationships without actually living anywhere near each other. Modern technology has brought about the ease of communication through social media, making it possible to find and interact with people whom you could see yourself hanging out with in real life, as one would do with friends you’ve grown up with from school or through work. Then, you build those relationships and eventually you get to meet in person with no awkwardness whatsoever. Which was exactly what it was like to meet Neil and Annaleis, who are both great people. 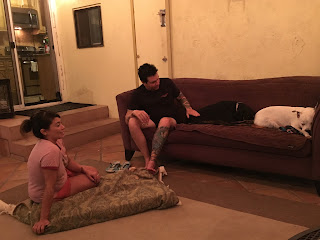 We arrived later in the evening on a Wednesday and I had to immediately jump online to record an episode of my Gotham Lights podcast. My co-host Henno (who also happens to be Neil’s best friend) and I were recording with a listener from Scotland, so it was the only time we could coordinate everyone. Neil was awesome and set up his recording equipment for me and, after some minor technical difficulties, the episode was recorded. During that time, Neil and Annaleis got to know my mom and they all hit it off straight away. I felt bad to have just arrived and then isolate myself in a room, but I joined them for a bit after I had finished with the podcast. Annaleis had to work the next morning so she went to bed, but Neil had taken the day off to help us find our way around. 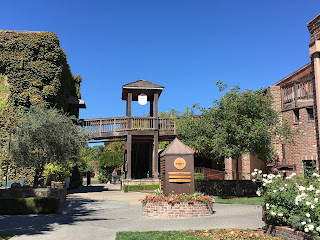 Thursday rolled around and we headed to a great breakfast place recommended by Neil, Grace’s Table. The food was delicious and mom was happy with the coffee brewed in a coffee press that you could pour for yourself. After breakfast, armed with addresses and instructions from Neil, we set forth to explore Napa Valley. Our first stop was V Marketplace, a collection of shops and restaurants in a very old building from 1870. We wandered around and took photos, while we let our breakfast settle. From there it was a short drive up Highway 29, where you’ll find the highest concentration of wineries on either side of the highway, to Calistoga where the Chateau Montelena was located. 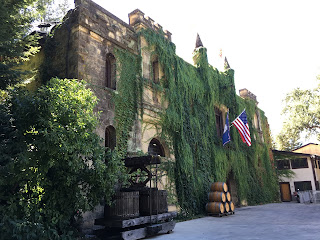 This was the must see winery for mom, although I really wanted to see it as well. Ever since we watched Bottle Shock, a movie with Bill Pullman, Chris Pine and Alan Rickman, we had decided that Chateau Montelena would be on our list of must see places should we ever make it to Napa. Fast forward to mom making plans to take her first real vacation of the year. I decided it would be a great idea to get out of town, and since the drive was something we had done before, there were no reservations about spending part of the vacation in Napa.
While at Chateau Montelena, we did a wine tasting and wandered the property. They had a Japanese-style garden with man-made lakes, where you could walk along the wooden walkways that connected several covered gazebos. You could rent out one of these gazebos for a picnic in the garden. You could also have picnic’s on the grounds, bringing your own food and the winery supplying the wine. The wine was good but we didn’t want to stay too long as we still had another winery to visit. We took photos and then hit the road again. 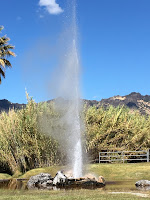 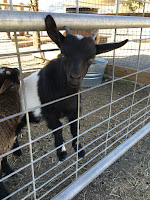 On the way to Chateau Montelena, we had seen a sign for the Old Faithful Geyser of California. So on the way out, our curiosity got the better of us and we stopped. Shortly after, we were inside the small fenced in area. There was a small geyser that was going off every 10 minutes and very comfortable seating from where you could watch it. We watched the first eruption from our seats with our feet up, then waited for the next one. The next was a smaller eruption, so we waited some more until the next bigger one occurred and got pictures and video. The place also had a variety of animals, that you could hand feed: fainting goats, four-horned sheep, a llama. They also had bocce ball and corn hole sets available to use while you waited for the geyser. It was a fun little place.
We headed back to the house after that, tired from our day of exploring, saving the final winery for Saturday instead. Delicious burritos from the burrito place that is frequently mentioned on the Dark Angels and Pretty Freaks podcast, with Neil and Annaleis, was the plan for dinner. The dogs, their adorable pitbull Zero and the doberman Nine, stuck close to the table to assist should any food find its way onto the floor. We had to disappoint them, as none of us were messy eaters. Mom and I both grew very attached to the dogs and they to mom. Upon our return to the house that day, the dogs gave mom the “mom whine” which had previously been reserved for Annaleis alone. Neil even mentioned at one point that the dogs did not normally warm up to guests so quickly as they did with us. This definitely made us want dogs ourselves, but that will have to wait until we have more space. 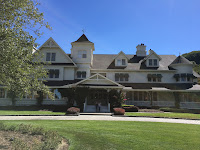 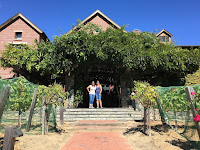 The next adventure, on Friday, took us out into the countryside to the widely known Skywalker Ranch. This is also the workplace of Annaleis, and she had arranged to take us for a tour of the grounds. We rolled past the guard house, through the covered bridge and along the road until we ended up in the parking lot of the Tech Building. Annaleis met us there and we hopped into the golf cart to head over to the main house. Guests are only able to view the first floor as the upper floors are offices still in use. But the first floor is amazing unto itself; many of George Lucas’ priceless paintings adorn the walls and he has a collection on display of movie items from Indiana Jones and Star Wars. My favorite room by far, though, was the reference library. Two stories of shelves, floor to ceiling, stuffed with books. It also had a wooden spiral staircase– it was heaven. After leaving the main house, we headed over to the fitness building to have lunch. They have a full basketball court, weight room, workout equipment, swimming pool, and a lunch room with cooking staff and daily specials. After lunch, we headed back to the Tech Building, while the rest of the staff was at lunch to view the empty mixing rooms and sound stage. We were even able to watch a short clip in the movie theater with killer sound. The whole tour was amazing and such a cool experience. Mom even mentioned to Annaleis that she had not been in such awe of a place since a castle she visited when she was ten. I asked if they were hiring any interns because that is one of the coolest and most fascinating work places I have ever seen. 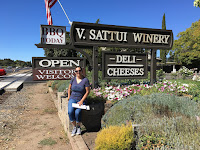 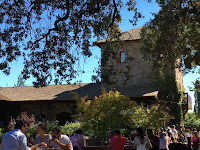 Saturday began with an early start and we had breakfast at the local Napa IHOP(International House of Pancakes, for those that may not know). We returned to V Marketplace, where I bought a t-shirt and mom bought Napa branded coasters. After some further walking around the area, to walk off that morning’s meal, we made our way to V Sattui. This winery quickly became our favorite, with so much to see and great tasting wines. We were able to view their wine cellar, wander their store where they sold not only their wine but different cheeses and food to pair with them, and sat on a bench underneath a large tree while we ate wine based gelato. We made it back to the house just in time to record an episode of Dark Angels and Pretty Freaks, where I was the “on mic” guest and mom joined us in the room. The day was rounded out by a delicious home cooked meal and fun conversation out on the patio complete with playing in the back yard with the dogs. 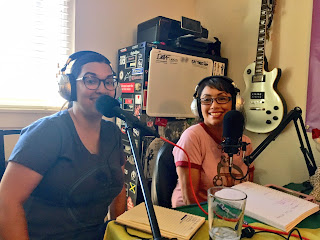 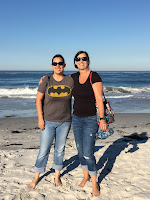 We were sad to leave on Sunday, but leave we had to. Another early start saw us in San Francisco for breakfast and wandering the piers, before winding our way down the coast on the Pacific Coast Highway. We went as far as Monterey Bay on Sunday, where we had a meal at a British Pub and spent the night in a hotel. Monday saw us stopping at Carmel by the Sea for a walk on the beach, before winding further down the coast and eventually veering inwards to make our way back to Arizona.

All in all it was a great trip and I would love to visit Napa again sometime. There is still so much more to see!