The Doctor (Strange) Will See You Now 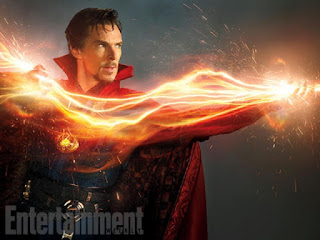 I’m sure I’m not the only one excited to see Benedict Cumberbatch breaking into the Marvel Universe this November, with the role of Doctor Strange. Even without everyone’s favorite consulting detective in the lead role, a Marvel fan can be giddy over any Marvel movie in their near future.

I still remember when the fan-made concept art first appeared, a literal What If…Benedict Cumberbatch as a Marvel character. Only for the thought to eventually become a reality.

He is an excellent actor with a career that’s taken off like a shot. For a while, it seemed there wasn’t a movie out that didn’t have the man’s face or voice appearing in it. Yet, no comic book superhero movies. Marvel saw fit to change that and rightly so.

Recently, Marvel released a first glimpse of Cumberbatch in what is presumed to be his costume as Doctor Strange. Along with that they also released quite a few pieces of concept art. But no trailer…not an official one that is. Queue one awesome fan-made trailer, garnering much attention on Youtube it quickly caught the attention of many websites.

The creator, Alex Luthor, does this regularly on his Youtube page–I’ve checked out a few of his trailers so far, very cool.

This leaves one wondering, how will the official trailer do?