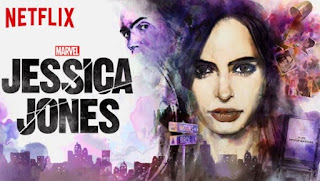 Earlier this year, we were introduced to the first joint venture between Marvel and Netflix, the highly successful Daredevil. Well, I am here to say lightning has struck twice. I am of course speaking of the second lovechild spawned from this magnificent union, Jessica Jones.

I previously did a post on Jessica Jones back when casting announcements were made, specifically David Tennant as Kilgrave. At that time, I knew very little about Jessica Jones from the comics. I actually looked up basic information about the character to get an idea about what the new show would be based on. Although, you wouldn’t need to know any information ahead of time to understand the story line of this amazing show.

I’m not going to give anything away, many out there have not watched it, or are still in the process of watching it. I’ll try to keep it vague and short.

The theme music to begin with, is incredibly fitting. It starts out subdued with an old crime noir feel before changing gears to a louder rock infused tone. I like to think it symbolizes first Jessica’s profession of being a private eye and secondly the conflicts she must deal with: her tormentor and her own self doubt. Next there were the visual effects of the opening title sequence. The shadowy pastels, the blended scenes both vibrant but subdued at the same time. An ode to the mysterious yet violent nature of the story line. I know, a little deep, but it’s what the opening makes me think of. In short, an awesome opening that pays homage to an old genre while having a fresh modern vibe to keep it in line with today’s interests as well.

As I mentioned previously, I don’t want to give anything away, I know there are some out there still watching the series. So I will just end by saying, the show was much more than what I expected. It was well written and well performed. Marvel is truly outdoing itself with these Netflix series. I am certainly looking forward to the next ones.The cast was amazing. I know there had been talk prior to the show’s release, about how well certain actors were going to be able to represent these characters. To be honest, aside from David Tennant, I didn’t know most of the actors. I knew Krysten Ritter but had seen very little with her in it. I’d never seen Don’t Trust the B**** in Apartment 23 or Breaking Bad. Then there was the actress who played Jeri Hogarth. I knew her from The Matrix. But everyone else was a new face for the most part. I’ve been a fan of Tennant for some time. I’ve seen quite a few of his movies and series.

Ritter and Tennant were the ones I heard the most about, nothing negative just doubt. Could Ritter pull off the hard drinking tortured soul that Jessica is? Tennant is well loved for his role as the Tenth Doctor in the British sci-fi show Doctor Who (where I first saw him). He was goofy when he wanted to be but serious when he needed to be. Could he be the evil and manipulative Kilgrave? The answer to both of those questions is undoubtedly…YES. Tennant pulled off playing the evil character with such genius. In such a way that you almost sympathize with the villain before being reminded that he is indeed a bad man. The things that Kilgrave is responsible for…wow.