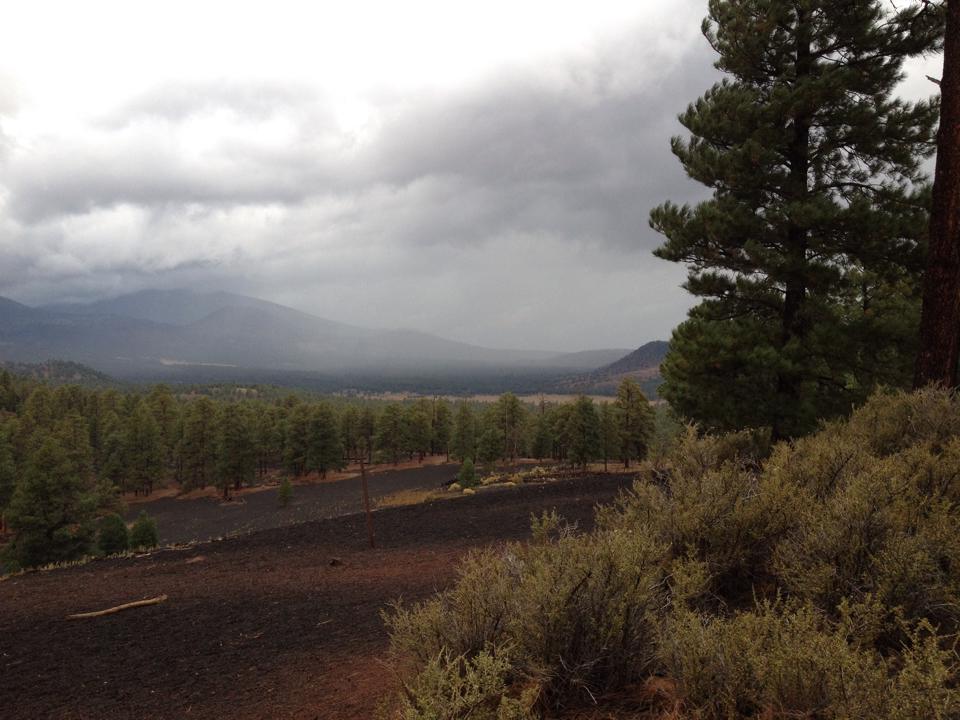 While I highly recommend hiking to anyone–great form of exercise–however I must caution against trying to hike in a thunder storm. So as I mentioned yesterday, today being free entry into any National Park day, we decided to visit the Sunset Crater Volcano National Monument. It’s located in Flagstaff (just outside of it) and includes several hiking trails as well as old pueblo ruins. We got a late start, as per usual for family outings, although this time it was due to the fact that I had to get the air in the tires filled before we could head out. My tire pressure light had come on the day before. So that took a little bit of time and then we took a bit more to eat some breakfast.

But then it was road-trip time and it was great to just get out of the city again. We figured a bit of rain wouldn’t hurt and if it turned out to be a lost cause we wouldn’t be losing anything for going. We took umbrella and jackets just in case, it seemed a sound plan. Fast forward two hours later to our arrival in Flagstaff. I’ve been to Flagstaff, AZ on numerous occasions (as I have previously mentioned) but had never ventured to the park. I’m sure there are still many other hidden treasures of northern Arizona to explore as well. A few of my friends attended Northern Arizona University which is also located in Flagstaff, so that was mostly the reasoning behind my frequent visits. But, I’m getting off topic. Hiking…thunderstorm. So, rain was in the forecast for today, we left Phoenix outrunning what looked like quite a storm and by the time we arrived at the park, it seemed as though we had succeeded. We hiked a strenuous 1 mile trail at the top of which you can look down into the depression of one of the former volcanoes in the area. By the way, a little fun fact for you: The Sunset Volcano erupted in 1045 but trees did not start growing back in the area until 450 years ago. It was a good hike and we were only interrupted by rain once on the way up–a light rain–we thought we would be fine. Just as we make it back down to the parking lot to start on the more interesting lava flow trail, it happens. The heavens unleash a torrential downpour which we narrowly avoided by jumping into the car. Now we again convince ourselves that its just rain and it will pass–we decide to wait it out.

10 minutes later: Thunder bolts and lightning, very very frightening me! Ok, Queen may have over exaggerated a bit because it was really cool to look at. But that also meant that trail number two was cancelled. Slippery lava rocks in the rain holding an umbrella during a lightning storm–that would have gone over really well. We drive back to the visitors center to wait some more (by which I mean buy souvenirs). It lets up a bit and we decide to drive all the way through the park to check out the Pueblo ruins, you know in case we might be able to see something from the car as we drive by. We even braved getting out at the first one but then our old pals thunder and lightning decided to crash the party again. So I got a couple pictures and we hightailed it out of there as it started to rain…again. So we made due with slowing down as we past the other two ruins in order to sneak a quick look and eventually made it out the other side. Back to Flagstaff! We enjoyed a delicious dinner at the Galaxy Diner on historic Route 66. If you’re ever in Flagstaff I recommend a stop there. Tonight they even had a guy playing live music on a keyboard, guitar, and harmonic. No, not all at the same time, he wasn’t Dick van Dyke. The Galaxy Diner is a 50s themed restaurant famous for it’s decor and good food. The last item on the agenda was a quick stop at the Route 66 Roadhouse (they have some really cool cars for sale there, specifically a 1966 Ford Mustang) for a beer and then it was back on the road homeward bound. No more rain, and made it back in time to still post this today. So, lesson for today: Don’t go hiking when there’s an 80% chance of rain in the forecast. Chances are, it turns into 100% by the time you get to where you’re going. Cold, wet, wind–not so much fun. Still would give this little adventure two thumbs up though. The plan is to return some other time, when it’s not raining.