That’s Why They Called Him Mr. Fahrenheit: A Bohemian Rhapsody Review 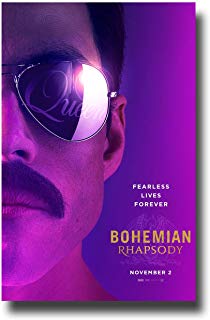 Any way the wind blows…allow it to direct you into the nearest movie theater for the closest experience to a Queen concert today with Freddie Mercury, that our generation, or any generation will get to experience.

To say Rami Malek personified Freddie Mercury, is putting it simply. He gave a fantastic and an authentic (as authentic as you can get, including the teeth) portrayal of the larger than life lead singer of the British rock and roll band Queen. The man was so much more than his sexuality, his disease, his music…he did what he was “born to do, be a performer.”

While this movie has been criticized for the choices to “focus on the band” rather than Freddie’s homosexuality and struggle with aids, the themes are there. From what I had read and heard, I honestly was expecting much less than what I did wind up seeing in the theater. Could there have been more focus put on things that were such a large part of the man’s life? Yes. Was it given justice? That’s not for me to say, but I can say this, it wasn’t “left out” entirely. I have been a lifelong Queen fan, since I first discovered the powerful voice of Freddie Mercury and the often experimental and out there lyrics and musical choices of the band. I was a guest on the music podcast of good friend Chris Maier, Our Liner Notes, where I took part in the mixed tape series. One of the first few questions was, “What song did you plant your musical flag in?” My choice was Queen, Radio Gaga to be exact, a song I had been able to relate to at a young age. Queen started me off on my path of rock and roll discovery, which led to my affinity for classic rock, and Brit Rock. If it had not been for Queen, I might not have discovered David Bowie, The Who, Led Zeppelin, Cream, etc.

I would like to say I would have still discovered David Bowie, because of my love of the movie Labyrinth, but I’m honestly not sure if I would have made the connection as a child, without having come across Under Pressure. I fell in love with that song and many many more, during my pursuit of everything Queen. For one of my birthdays, I specifically requested Queen’s gold-colored Greatest Hits I and II album, which included 34 of their hits. I could not have been happier when my mom handed me the square-shaped package to unwrap that cold January morning.

I played those CDs nonstop on every CD player at my disposal, in the house, in my discman, and eventually in my car. It hurt me down to my music-loving soul the moment I scratched one of the discs, adding a skip in the middle of Don’t Stop Me Now. Luckily, it was minimal and wouldn’t have kept me from playing the CD even if it hadn’t been. I still have both discs in my car visor CD case and they have moved with me, in the utmost care, in that case every since.

Now, I don’t want to bore you with my love of Queen, I think I made my point well enough. The point being, how much Queen has meant to me and my love of music, and why I was more excited to see this movie than any other band “biopic” before it. So back to the movie…

I am not going to spoil anything from the movie, I want to urge everyone to go see it and form their own opinions. Even with as much as I know about Freddie Mercury, Brian May, Roger Taylor, and John Deacon, I still learned so much more from this movie. I was taken in by the story, by the family that was comprised of these four men, which grew, changed, fell apart, and found its way back together again. Just like any family, experiencing the ups and downs of life.

I went to see this movie with my boyfriend, and as we sat in the car discussing it afterward, I said, “this movie, made me feel things.” It did. I have never considered myself a very emotional person, so when I say that this movie made me emotional, I mean it in every sense of the word. I was enthralled, upset, angry, relieved and overjoyed. It’s a kind of magic… this movie, a magic worth experiencing for any Queen fan, any music fan.

And, I could not help quietly singing along. I dare anyone to sit through this movie and resist the urge to stomp your foot and clap your hands along with the iconic beat of We Will Rock You. Song after song, performance after performance, all culminating into one of the most famous concert events of all time, Live Aid. I actually have a connection to the Live Aid scene in this movie. Early in the promotional period of the film, when post production was still going on, the movie website put out a call to fans the world over. Send us your voices, they said, and so I did. Using the website, I submitted an audio clip of myself singing Bohemian Rhapsody and I sent it in. The website thanked me for my submission, for the chance to have my voice included in the film, and told me to await further information on whether I was included. To be honest, I didn’t really think too much about it after that. Until two weeks ago, when I received an email congratulating me on being included in the film. The email included a youtube link to a video, which explained just how they used the voice submissions they received in the film. Me, and what I can only think was thousands of other fan submissions make up the voices of the crowd at the Live Aid concert, singing along to Bohemian Rhapsody while the band performs the song, as the first in their set. It’s not a huge deal, but it was a neat experience to be a part of this movie, even in that small way.

So please do me a favor, do yourself a favor, go see this movie. This movie, which made this Queen fan feel like “a shooting star leaping through the sky.”