Forever, I Hope Its Endurance Matches Its Name. But Wait, There’s More!

By Stefanie Muniz on Wednesday, September 24, 2014 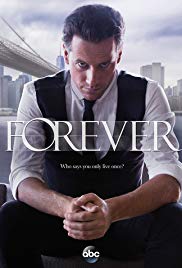 To stay that I am interested in the new show Forever, would be an understatement. I think enthralled would be a better descriptive for it. It’s Sherlock meets Highlander, sans swords and beheadings. Henry, our leading man, has a very unique existence. I am not giving away much by stating he can’t die. Or rather he can die, but he does not stay dead. The commercials have given that away so it’s not a spoiler. I’m trying hard not to spoil anything the night of, if I plan to write about it. But of course, when it is fresh in my brain, it’s great fuel. So, if you want to know more and you really should, check out Forever. It’s on ABC directly after Agents of SHIELD.

Speaking of which, moving on to the Season 2 premier of Marvel’s Agent of SHIELD. It was fantastic! If you checked out during the first season, shame on you (just kidding), but do yourself a favor and jump back on the bandwagon. Find a way to catch up, I know some good links that will provide adequate summaries. But you are really missing out. Coulson and his team are back and things are crazy. I’m still recovering from one direct assault on my emotions concerning one of my favorite characters and I am refusing to accept that situation. I don’t know how many more mis-directions I can take, after Sleepy Hollow yesterday and now Agents of SHIELD today. But, it’s still early and anything can happen. This is SHIELD after all, whatever is left of it.

I also happened to catch the preview for the season premier of Once Upon A Time. They certainly did not waste anytime hacking off a piece of the Frozen cash cow. Watch out Storybrooke, Elsa’s in town. Actually maybe you should all just chill out. Ha, get it? Chill…out…ahem, anyway. I’ll say this, if we get an episode of Rumpel doing his own version of Let It Go, I might be persuaded to continue watching. I already started losing some interest with last season’s Oz story tie-in. What does the modern ice queen have in store for Emma and the rest of the gang? Can you build a snowman if you have a hook for a hand? Will Charming pick up the Ukulele? Tune in Sunday! When none of these questions will be answer. But feel free to make up your own answers.