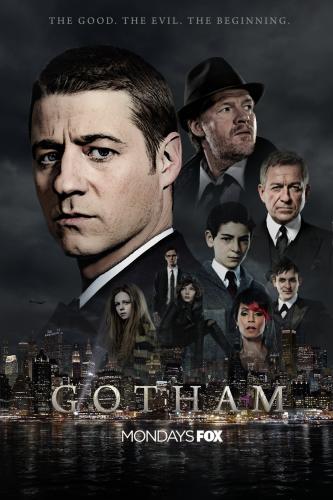 Ok, not quite Batman, but young Bruce Wayne is well on his way to letting that revenge fuel him. I am of course referring to the season premier of Gotham on Fox. I’m going to try to limit the spoilers, but everyone knows how Bruce Wayne came to become Batman, so I don’t think I’m spoiling too much by referencing the death of his parents. The scene which we opened up to after a brief intro to a young Selina Kyle.

The show proved to be awesome, as I knew it would be. I’m crazy about anything Batman. He’s my favorite comic character and I’ve grown up watching all his movies and animated TV shows. The only one I haven’t had too much exposure to is the 1966 Adam West series. I’m sure I’ll watch that eventually, especially with Batman fever being at a peak yet again. Comics are flying off the shelf and the internet is a buzz with Batman chatter. Who will appear in the show? What other classic villains and heroes are slated to grace the screen once more?

This episode of course gave us everyone who had already been mentioned previously. So if you have not been following Gotham prior to the premier and are waiting until tomorrow to watch the episode, stop reading now. Have you stopped reading? Proceed at your own peril. Anyway, our boy Jim Gordon–fresh-faced newbie with GCPD–makes his entrance inside the precinct, taking down a perp. We are also introduced to his partner, GCPD vet Harvey Bullock. Our duo are of course sent out to investigate the double homicide of Mr. Thomas & Mrs. Martha Wayne. Jim seeks to comfort a distraught and shock-suffering Bruce Wayne, he vows to solve his parents murder, before Alfred shows up to usher Bruce away.

Now for our villains/soon-to-bes. We have a brand new (created for this series) villain by the name of Fish Mooney, the young pointy-nosed penguin Oswald Cobblepot, a father-less Ivy Pepper (Poison Ivy waiting for her time to bloom), mob boss Carmine Falcone, and currently working for the GCPD Edward Nygma. None of these listed should be new to anyone, if you’ve even been marginally following the show news. But if they are, apologies, if it’s any consolation I’ll stop here. I’ll summarize by saying, the show did not disappoint and I would definitely recommend it.

Immediately following Gotham was Fox’s returning hit show, Sleep Hollow, which premiered it’s second season. Everyone’s favorite witnesses are back to fight the good fight against the forces of evil. I will definitely not give anything away. except that a familiar face will show up, even if it’s just briefly. A face that I hope we see again, because I like his character. I will also say this, Sleepy Hollow is never dull and the beginning portion of the episode threw me for a loop. It nearly had me fooled, my gut was telling me otherwise and I nearly disregarded it. It was clever and tricky and I really enjoyed it. Well done, Alex Kurtzman, well done.

I give both shows two thumbs up and cannot wait to see both progress. Despite knowing enough information about the back story of most of the characters, I feel Gotham will hand us many surprises and will continue to keep us at the edge of our seats. I’m glad I could contribute to the opening ratings of both shows this evening and have a feeling that Tuesday will only barely be second place to Monday nights. Tomorrow of course brings us the season 2 premier of Marvel’s Agent’s of Shield. Oh, Agent Coulson, how I have missed you. Yeah, ok, the team too but let’s be honest, I watch it for you. Fall TV this year is going to be all sorts of awesome-sauce.