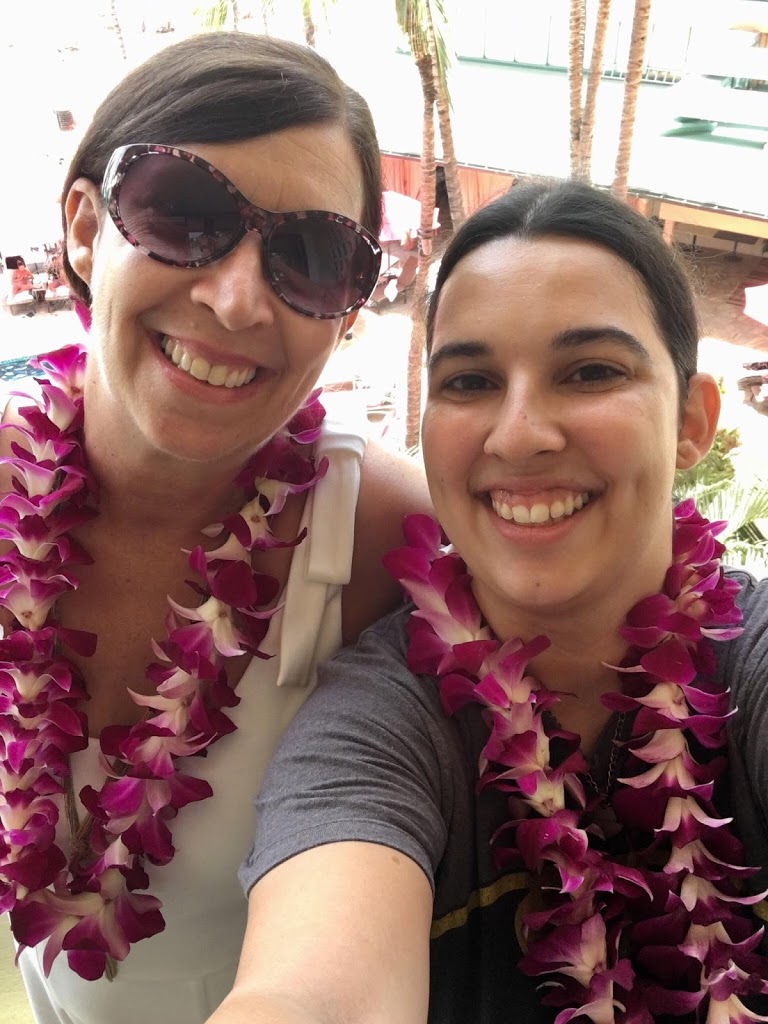 We recently returned from a trip to Hawai`i. A wonderful vacation that my mom won through the local Health and Wealth Raffle, held by St Joseph’s Hospital and the Barrow Neurological Center. Otherwise, we could not have afforded an (nearly) all expenses paid trip with first class airfare, a three night stay at The Royal Hawaiian on Waikiki Beach on Oahu, car service to and from the airport in Honolulu, a seven night stay at the Fairmont Kea Lani in Wailea on Maui, a rental car on Maui (which we upgraded to an SUV for a super deal) and snorkel tour of the Molokini Crater and Turtle Town. To say that it was an amazing trip, hardly does it justice.

It was truly a tropical paradise, green and warm, with the bluest skies and water I have ever seen, when there wasn’t a cloudy sky from a pending storm. We flew in ahead of Hurricane Lane. We luckily experienced no negative effects from the hurricane, which remained about 200 miles out and moved so slowly that it eventually downgraded to a tropical storm. Of course, it was still necessary to take certain precautions, which was understandable. Beach and pool furniture was packed away, balcony furniture was moved into rooms and hallways. Most of the staff and other guests that we talked to were not concerned by the storm and by the time it was closer to Oahu, it was set to only hit them with heavier rain. However, the main island received a lot of rain and they had to deal with flooding, while Maui dealt with wind damage, rain, and a fire. By the time we arrived in Maui everything was much better and the location of our resort had been shielded from the most of it by a mountain. So while we had cloudy days on Oahu and missed our Pearl Harbor tour due to the harbor being closed as a precaution, we were able to enjoy sunny days and great weather on Maui. That is not to say that we did not enjoy our time on Oahu. We spent every day walking up and down Waikiki Beach, enjoyed Mai Tais, and ate tasty seafood.

Once we arrived in Maui, we picked up our rental car and stopped at the Costco near the airport, to grab some items, based on a great tip from my friend Annaleis, who I visited in Napa a couple years ago. We explored the surrounding area, did some shopping and ended the trip with an amazing luau. But prior to that, I went on a zipline tour which was a lot of fun and the day after mom and I both enjoyed our snorkel adventure. I also rented a GoPro for the zipline tour and an underwater camera for the snorkel tour. I was able to get excellent video and photos which made me really happy.

During the snorkel tour, we were able to see and swim amongst a large variety of fish and I got to be up close with a couple sea turtles. A great thing was also being close to sea turtles in the shallow water of the beach near our hotel. Turtle Town was just around the corner from our hotel beach, we could have swam to the same location we went to by boat. So it was amazing to see several turtles slowly make their way along the beach from one end to the other, and a couple quite large. It was a goal of mine to see a sea turtle on the trip, but I would never have thought I’d be so lucky to see so many and so easily. I was also able to get some reading done while seated beneath an umbrella on a lounge chair at the beach. I also took a ton of photos with my phone and was able to capture some picturesque sunset views on both Oahu and Maui.

I could not recommend Hawai`i more to anyone, it’s a spot that everyone should visit at least once. We also have fallen in love with Maui and desperately wish to return again soon. Hopefully next time with better weather. But despite the hurricane and storm, we made so many lasting memories.  All the locals we interacted with, from the hotel staff to our drivers and tour guides, were some of the nicest and welcoming people I have ever met. We made an effort to learn as much as we could about the islands while we were there as well. We took part in a Hawaiian Language class, learned about the local plants, and the local history and culture. It was all so fascinating, and yet we still have so much more of the island to explore.I don’t know when I’ll next make it back to Hawai`i, but it’s definitely making it on the repeated visits list. Mahalo Hawai`i, until we