Being Defiant Against the Sequence of Events in Defiance (spoilers) 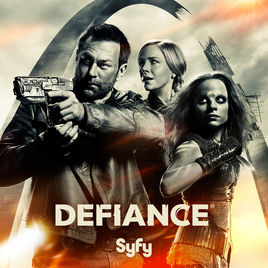 I finally settled down to watch Defiance (the show on SyFy), I had missed a few. Or so I thought. I pulled up the DVR list and was surprised to find five shows waiting for me, including the finale. It’s not like I was avoiding watching it, I just had other things to watch and catch up on. So my entire day has been spent marathoning episodes of Defiance.

It was fine until I got to the second to last episode. My heart took a direct hit in the form of a Tommy shaped bullet. I wasn’t expecting his death to effect me so much but I found myself yelling at the TV–demanding it to make it not so. My warnings of refusing to continue watching if Tommy was not spared were of course unheeded and I think it was Nolan’s reaction to his former deputy’s demise. Losing Tommy, losing a friend who he had mentored and…I think loved like a son or little brother–anyone would react the same.

The show did a great (while tormenting) job stringing along the hope that he might make it. Nolan would struggle to drag him through the woods and cold and arrive in Defiance in the nick of time. I thought that all the way up to the point when he finally did pull Tommy’s body up to the wall, Berlin confirms he is dead, and Nolan storms off. It was at that point that I lost all hope of anything lifting me from my despair. Even the ending left me wary of what is to come, a cliffhanger, two unresolved story lines setting up another season (I hope).

One thing I did enjoy, Linda Hamilton’s appearance as Pilar (Rafe’s presumably dead wife, who was actually just away in the futuristic equivalent of a mental ward). I hadn’t seen her in anything recently. I also loved her hairstyle. I still remember the first thing I saw her in as a child, the TV show Beauty and the Beast with Ron Pearlman as the Beast. It was a great show, I didn’t understand it much as a child, but I appreciated it later watching it again as an adult. Terminator was possibly her most famous role, but that I didn’t watch until much later. I liked the character of Pilar and her attempt to re-integrate with her family while also seeming to have ulterior motives. This theory proving true within the final episode. I’ll be interested to see what happens with her and the children (Christy and Alac) when the next season premiers.