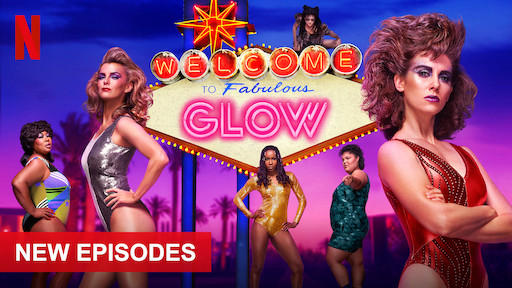 Netflix recently released the third season of their popular show, Glow, a show I have been meaning to watch for some time now. So I used my recent week-long business trip to Chicago, to catch up. During the day, I trained the new hires on the team, and the evenings were spent in my hotel room watching TV I had missed.

Glow is a very easy show to binge, which I know is the calling card for original Netflix series, but these episodes are about 30 minutes each, so the binge-ability factor goes up even more. I burned through the first season and a couple episodes into the second season over the week and finished the rest of season two and three over Labor Day weekend.

Needless to say, I loved it. I knew that I would definitely want to write about it. But how do you write about a show in it’s third season, where you’re late to the game, and most people have probably already seen it and know all about it. Cue my helpful boyfriend, Agent Palmer, who offered to run a Q and A session with me about the show (he’s seen all three seasons already). So let’s get into it, shall we?

AP: Who’s your favorite non-wrestling character?
S: Bash, the rich producer of Glow, for his wealth of emotion, not his money.

AP: A follow up question…And that has nothing to do with the fact that the actor played Piz on Veronica Mars?
S: No, not at all. I like Bash as a character. He’s had the most emotional growth of any character.

AP: The three seasons could be labeled prep, TV, and Vegas. Which did you enjoy more?
S: TV, so the second season. You had the girls becoming impressive wrestlers and turning into a little family.

AP: Which relationship that the show has set up, whether it’s good or on the rocks, are you most rooting for?
S: As the reasonable and safe choice, Ruth and Russell (the camera operator), but honestly it’s Ruth and Sam. They get each other and they have this unrequited love vibe going on.

AP: Is there a topic you feel this show has yet to cover that it should?
S: So many topics have been covered already, and really well. I guess if I had to choose something, it would be what Male wrestling thinks about GLOW.

AP: What was your knowledge of wrestling before you watched this show?
S: I have watched wrestling, growing up it was the likes of Hulk Hogan, Macho Man Randy Savage, Rowdy Roddy Piper, Stone Cold Steve Austin, and The Undertaker. I didn’t watch a lot of it and it started to get less and less but I still knew the later wrestlers as well like Chris Jericho, The Rock and Triple H.

AP: What was your knowledge, if any, of the real GLOW, before this show?
S: None. I knew there were women involved in wrestling, who hung around the mens’ show, but I didn’t know GLOW was actually based on a real group of women in the 80s.

AP: Are you interested in learning about the real GLOW after watching this?
S: Yes, absolutely.

AP: Why do you think this show is relevant today?
S: Nostalgia aside, I think it supports the idea that women have the strength and ability to have dreams and goals in life and strive for them. The show is heavy on the theme of equal rights, independence, and breaking through barriers and metaphorical ceilings.

AP: What is the one thing that you have expected to happen that hasn’t?
S: I expected Debbie to have a harder time having her son live in Vegas with her, and away from his father. It seemed a bit odd that there was no sign of him at all.

AP: Is this a show you will suggest any and everyone watch? Or will you be selective in your suggesting?
S: I would suggest it to anyone, of an appropriate age. I’ve already suggested it to my mom. The issue is, most people I know are already watching it, I was the late starter.

With that, all I have to say is, I hope this has converted a few more late starters. The show really is great and a fun blast from the past; with the 80s music, hair and clothing styles, and the entertaining wrestling of the era. II really hope we have a season 4 in our future, because I am absolutely hooked on the Gorgeous Ladies of Wrestling.