The Newsroom: The Last of My Sorkin Education…For Now… 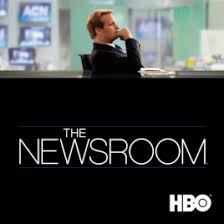 Of all the Aaron Sorkin shows I have watched so far, this one by far has affected me the most. In just two and a half seasons, the series finale brought me to tears and then had me laughing within literally a minute of each other because of how fast and hard I fell in love with these characters. It has surpassed The West Wing as my favorite Sorkin show, which is saying a lot.

I wrote a post on this very blog about how much I loved The West Wing and it’s characters, and I also wrote about how much I enjoyed its predecessor (because it aired first and then overlapped with The West Wing) Sports Night. And The Newsroom came out of nowhere shattering my favoritism and worming its way into my heart, where it promptly set up a warm and cozy home.

I have to admit, where The West Wing had most definitely been on my radar, I had not really heard of The Newsroom. This was largely in part due to it having been an HBO Show and I did not have an HBO subscription. Knowing what I do now, I would subscribe immediately were another season or movie or special to be made. I don’t think there is a show on currently that I would wish more for than The Newsroom, that is how much I love this series. Even as I sit here writing this, I am craving more, I want more, I need more.

But I’m not going to get more, so the only thing I can do is this. I will write about the show, the cast, the similarities. In a small and futile effort to keep “watching”, even if its only in my head and in my words.

I think what really helped The Newsroom climb ahead of The West Wing on my list of favorites, was the newsroom. Where The West Wing is set in and around the White House in Washington DC, The Newsroom is set in the New York City newsroom of a news television show. I have always been fascinated with news and journalism, but never considered it as a career path. I love writing, it’s the reason I have this blog, however, I don’t have the ambition for investigative journalism. I always felt that was a prerequisite to that line of work. Perhaps, if I applied myself more during school and been more involved with the school paper, but I also had a different dream job at that time. I was going to be a doctor, not a newspaper reporter. I’m neither now and I often wonder if it’s too late or if I’m a good enough writer to attempt it as a career. It’s easy when it’s just a hobby, but then nothing worth having in life is easy, or so they say. But I digress…

I always looked at news and journalism as something interesting and exciting to be involved with, when I was younger, but not something I should focus on as a career after leaving school. Lacking confidence in my own ability as a writer, I fell easily into the mindset that you could not make enough money to live off of as a writer unless you were really good, so why bother? I kept my love of writing going, as a hobby, online where it remained mostly private and shared only with my best friend. I felt comfortable and safe in an environment where I could enjoy writing, free of critique, but eventually, I realized that was not helping me improve my writing. So this blog was born and it’s been the most visibility my writing has gotten since high school.

Then, somewhere along the way I got involved in podcasting. First as a listener, then as a podcaster. And that required a certain amount of bravery and letting go of whatever remaining shyness that I had. I could be heard by strangers and friends alike on a variety of subjects. But, an audio medium is still very different from a visual media. Could I be on an interview type podcast or radio show discussing news related topics? Sure. But I’m not so sure about a news TV show, like what The Newsroom is based on. It is also completely different being involved in an indie podcast than one with funding and sponsors.

I guess the point I’m getting at, is that I am fascinated by those who do have careers in journalism, news broadcasting, and I’m also a little bit envious. But specifically when it comes to The Newsroom, the jobs that the characters have are cool and so interesting. You become lost in the what ifs of what it would be like to have a profession like that. I think that is one reason why The Newsroom affected me more than The West Wing.

In addition to the interesting representation of news media and journalism in this show, it has an amazing cast. You have Jeff Daniels as Will McAvoy, the lead anchor. Emily Mortimer as his Executive Producer MacKenzie McHale, along with her Producer Jim Harper portrayed by John Gallagher Jr. The cast is rounded out by assistant producers, reporters, other anchors, the head of the network and the heads of the parent company, portrayed by a talented bunch of actors: Alison Pill, Thomas Sadoski, Dev Patel, Olivia Munn, Sam Waterson, Chris Chalk, David Harbour, Chris Messina, and Jane Fonda. There is even a fun West Wing crossover with Mary McCormack, who makes an appearance as an FBI agent. There are a lot of other guest actors who appear in one or a few episodes, and it would just take too long to list them all out for their great roles.

But it was most definitely the main cast that was the other huge reason that I fell in love with this show. Jeff Daniels is a terrific lead, who is also only as good as the actors he plays off of or opposite of. The entire cast gives such an emotional performance through the entire series, without missing opportunities for humor. It’s your classic Sorkin recipe, dealing with much more modern topics and scenarios. I think that’s another thing that caught my interest, I remembered all of the news stories that they “broke” (on the show within the show). I could remember when the stories were on real news shows and where I was when these news items were happening. It that’s focus on human interest, that makes it a bit more relate-able to me than the politics of The West Wing.

The Newsroom breaks the Sorkin tradition of naming the pilot episode Pilot. Both Sports Night and The West Wing had their first episodes titled “Pilot”. (Even Studio 60 on the Sunset Strip, what Agent Palmer calls the last of my Sorkin Television Education named the Pilot pilot.) The Newsroom breaks that tradition by giving the first episode a name, “We Just Decided To”.

In Sports Night, when the show was at risk of being sold, a wealthy buyer swooped in to save them and keep the show intact. The wealthy buyer was played by Clark Gregg, who chatted with Sports Night’s executive producer in a bar. It was a happy ending. At risk of a similar fate, The Newsroom’s news show also needs to be saved by a wealthy buyer. Unfortunately, it is not Clark Gregg, but an eccentric billionaire played by B.J. Novak, who introduces drastic changes that the staff takes issue with.

One final similarity, the great writing of Aaron Sorkin. The finale of The Newsrooms had me crying and laughing in less than a minute from each other because of good writing. Both emotional reactions were triggered by a heart-felt gift with a character in tears followed by a humorous interaction with a child. Sorkin isn’t playing with your emotions, he’s given you the freedom to feel, he expects it and this is his way of saying it’s ok. It’s something you are sure to find in all his shows.

One thing that stuck out to me while watching this show, was the theme, or the focus of the show within the show. It started with MacKenzie and quickly spread to Will and the rest of the staff, which was to uphold the truth. And it was about more than that as well, it was about not staying in the middle just to be on the safe side, it was about taking chances to find the truth and facts and put them out there in the world. It really struck me, watching this show now, with the current Trump administration in the White House. The Newsroom has such a heavy focus on truth, facts and their importance and we currently live in an era where neither seem to carry weight anymore. Or at least that’s the way it appears, unlike in the era that The Newsroom is set. That realization certainly had an impact on the way I appreciated the underlying theme.

We don’t watch the nightly news on a regular basis, partly because half is biased and partly because we would rather watch more entertaining and uplifting content instead. But, if there was a news show like the one in The Newsroom, I think we would watch it regularly.

So there you have it. If you would like to check out this fantastic show for yourself, you can find it available to stream on Amazon Prime. And if you’re still not sure, check out this Youtube clip of Jeff Daniels’ speech from the first episode (which did go viral when the show first aired). It’s what sold me on the series, and it just might do the same for you.