My First GM Campaign in Pathfinder: Fall of Plaguestone 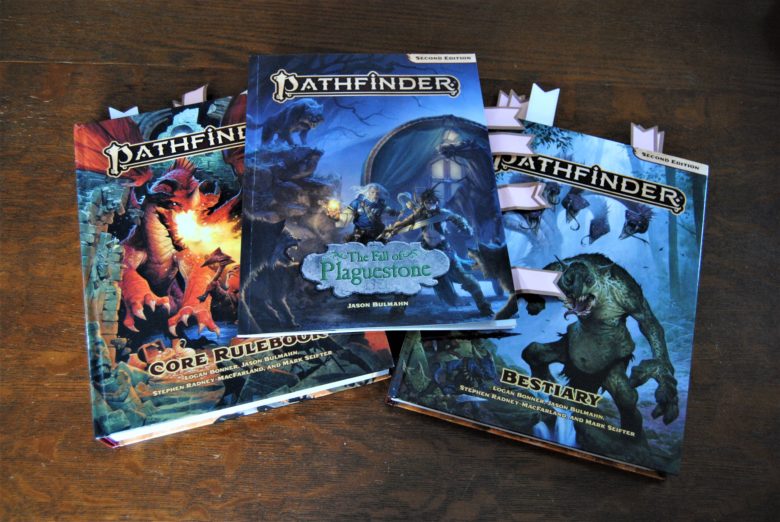 As I mentioned during my 2019 Review Post, I recently started being the GM (Game Master) for our weekly Pathfinder RPG game night. I am in charge of setting the scene, playing all of the non-player characters or NPCs who interact with the characters played by Jason and Zapata, and of course, manage the actions the boys try to take throughout the campaign. So far, we have been using pre-written adventure paths from Paizo, the company responsible for Pathfinder, as I am not quite ready to come up with my own adventure, nor do I have the time.

This post is about the first adventure path that we tried out, The Fall of Plaguestone. I owe the discovery of this particular campaign to a podcast that I regularly listen to called The Danger Club. It’s a UK based live play podcast who play Pathfinder and record their campaigns. I also have to credit them with starting in on Pathfinder as an RPG, along with the TV show, HarmonQuest, created by Dan Harmon and Spencer Crittendon.

I also have to give credit to Paizo, of course, given that they just came out with the second edition of Pathfinder, introducing new play mechanics, which timing-wise made it really easy to get into the game. I now own the 2E (second edition) Core Rulebook, Bestiary, The Fall of Plaguestone, and Hellknight Hill (part 1 of the Age of Ashes adventure path). We are nearly finished with the Hellknight Hill adventure path, and I even got my mom involved with Pathfinder, but this post is about The Fall of Plaguestone.

The Fall of Plaguestone is a three-part adventure path that is great for a group starting out in Pathfinder or for a group looking for a shorter adventure to fill the gap between larger campaigns. This book took us about four or five weeks to get through, but it was my first go as a GM, and we had a limited time each week as game night is usually on a Thursday, a work night. Plus, there were a couple of weeks skipped in between. Despite that, it is a fairly straight forward and fun adventure to go through, with some great characters.

The overview for the Fall of Plaguestone is a tale about a nefarious plan threatening the small town of Etran’s Folly. The townsfolk were nearly wiped out by a plague about 20 years prior, something the new adventurers traveling into town discover during their stay. But before they can learn more about the town, they are thrust into an investigation into the murder of caravan leader and traveling merchant, Bort, who was poisoned in the town tavern.

As suspects themselves, the players must clear their names and find the true culprit and why they had it out for Bort. From there, the story twists and turns, depending entirely on how you play and the choices you make. I am not going to give away more of the story than that or what should happen, in case there are those of you out there that wish to check out this RPG since it’s definitely more fun going in fresh. At least for the players, the DM will, of course, be familiar with everything that is going on to an extent.

What I can do, however, is give you some insight to further entice you to check out this fun roleplaying adventure from Paizo. You can order it from their website directly, or you can do what I did and order it off Amazon.

The adventure path has a little bit for everyone. If you like dungeon crawls, it has underground lairs to explore, if you like exploring towns and speaking with townsfolk to get your bearings, it has that too! If you just want to fight things and you don’t care what or where, then yes, you also will be happy. There was plenty for my heroes to do during the adventure. For the Gnome ranger, Ira, there were plenty of things to unlock with thievery skills and targets for his bow. For the human Cleric, Valen, there was plenty of trouble to get into which would require his healing skills. And I’m sure a wizard, fighter, Elf, Dwarf, whatever or whoever is in your party will also find things to entertain them and allow them to utilize their abilities.

Since this was my first go at being a GM, mistakes were definitely made, but I think overall, I did fairly well. I definitely learned a lot, which I could apply to the current and future adventure campaigns. It also helped to have an experienced GM in the campaign, with our friend Zapata, who gave me some great tips along the way. Trying to stay within the rules but also managing the sometimes random nature of the campaign, even one that was written for you, was definitely the most difficult part about the entire thing. (Besides, my two main characters were pretty unpredictable, as well.) Aside from that, it was a lot of fun and certainly well worth the money spent.

But don’t just take my word for it, go grab a copy and find out for yourself. Good luck, have fun, and may your dice be lucky.