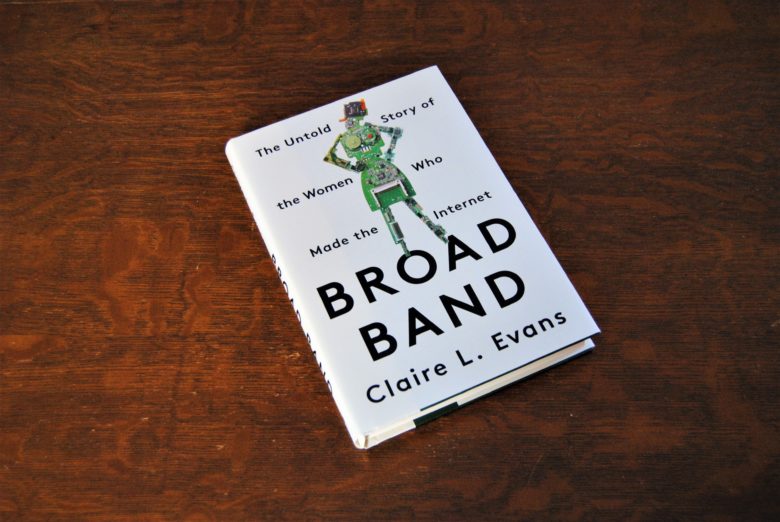 On the suggestion from my boyfriend, I recently read the novel Broadband by Claire L. Evans. It’s a nonfiction book about the pioneering women involved with computers throughout history, starting with Ada Lovelace, Grace Hopper, and more recent female entrepreneurs such as Pam Hardt-English, Stacy Horn, and Dame Wendy Hall, who tried their best to encourage women to use computers and join the digital revolution.

This is a topic that I am not well versed in, computers and the advent of the internet, aside from the basic details that you pick up through documentaries and casual learning. But it is a topic I find interesting and would be interested to learn more about, which is why I did not hesitate to read Broadband when it was suggested to me.

I work on a computer daily, whether it be for my day job or for my personal pursuits of blogging and podcasting, so I am no stranger to a computer. I would consider myself tech-savvy, for an untrained person, and I also made an effort last year to teach myself how to code (I have to get back to that). But despite that, there is still so much that I do not know and would not be capable of doing on a computer, without further training. But to say that I have been inspired by this book, would be an understatement, fueled by the generations of women who have come before me and the contributions they stake claim to that have had important impacts on what we so easily take for granted today when it comes to computers and the internet. Early on in the history of computers, before the technology of today and even before the giant machines of the past, the term belonged to a living human being. And that human being was a woman. The job of a computer was women’s work, similar to the role of a secretary. Women were put to work crunching numbers and calculating information, while the men were off at war or performing jobs not suited for women at the time. It’s a field of work that I personally was not aware of belonging to the female gender. I assumed the field was dominated by men, given what we know today about the tech pioneers of computers. And it is for that reason that I am glad this book exists. To prove that women had a pivotal role in computers and technology and bringing the facts into light when they may have been forgotten.

It is not my goal to get into gender equality with this post, but reading through some of the stories of these women, you certainly get the idea of just how unfair things were for them during their lifetimes. I can believe how infuriating it must have been for them, for their contributions not to be taken seriously. But, I am getting away from the focus of this review, the book itself.

The novel is very detailed, you can definitely see the meticulous work and the volumes of notes that must have gone into the writing of this book. There is care put into it to ensure the story is told, not just by the author, but by these women as well, and as best as possible for those no longer living to be able to tell their stories. You are invited into the process later in the book when the author reveals her sources and some of the meetings she was able to arrange with the subjects of her book, either in person or over Skype. Even in that, Evans is detailed about when the meetings occur, where, and what it’s like to speak with these women.

These meetings are a large source of her material for the later portions of her book, the more modern influencers of technology and the internet. And I don’t mean influencers in the current definition of the term, people getting famous on Instagram and Youtube. Although, in a way, these women were synonymous with fame, thanks to their contributions. But I still like to think that it was a far greater contribution from these women than a lot of the so-called influencers of today. There are many streamers whose content I enjoy and who impress me with what they have accomplished. I mean the people who purposefully seek fame and do so by treating themselves as a commodity to share with strangers in order to find self-worth, and who get lucky with the money they receive, without any real effort or hard work.

But I have once again gotten off-topic. What Evans did not get from interviews, she clearly got from extensive research into the topic, people, and technology that she ends up discussing at length in her novel. It is impressive and definitely makes for a nonfiction novel well worth reading. I learned a lot, and while I am the type of person that finds this topic interesting, this novel easily appeals to someone who may not be familiar with the subject of coding and the history of the internet. But that’s also what is so great about this book. Evans tells you everything you need to know, and you come away feeling a sense of pride for the women of history who we have to thank for a lot of technological conveniences of today.

So please, go out and find the book, and join me in applauding these amazing women, Claire Evans included. This is the perfect book for the young girl in your life interested in stem and technology, who could use some great female role models in the field of technology. And a fun read for everyone else.