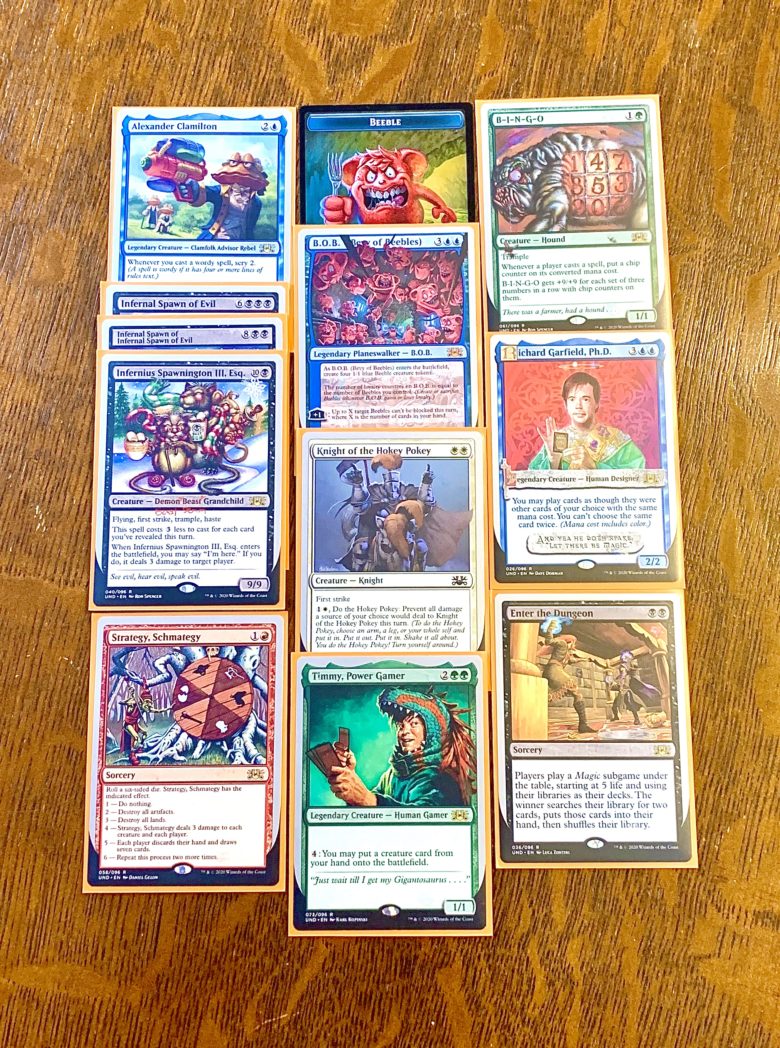 I have written about Magic the Gathering before, but it has mostly been limited to my recap posts and mentioned in relation to Jason, my boyfriend, and how he had gotten me into the game. But now it’s been over a year and I have developed my own interest and love of Magic the Gathering. I have primarily played online with MTG Arena and I really enjoy it. I have been able to use it not only as an online game but also as a learning tool, to teach myself new and different strategies and get better at being a Magic player. After all this time, I felt ready to try out new and different formats of the paper version of Magic that I know nothing about.

The first new format that we decided to try was the Commander format. In Commander, you build a 100 card deck, with one card being your commander, and filling in the rest of the deck with only one version of other cards and land cards that match the same colors of your commander. The commander is not in your deck to start with but sits off to the side until you can cast it, and should it be removed from the battlefield, you have the ability to replay it from the “Commander Zone” by paying two additional mana on top of the original casting cost. You can repeat this as many times as needed, which is different from the rest of your cards which can be exiled or sent to the graveyard. If you’ve played Brawl on MTG Arena, the format is basically the same just with 100 card minimum and not 60. This format is meant to be a social format where you play together with multiple friends. It can lead to long games, that can twist and turn and lead to a lot of fun and interesting gameplay.

Jason created his commander deck from cards he already owned, and then bought a few cards he really wanted to fill in the deck. I felt a bit overwhelmed with the sheer amount of options for commanders, and not having many cards of my own, I purchased a preconstructed commander deck. I narrowed down the colors that I wanted to play, then looked up the options and was lucky enough to find a deck using all three colors I like to play. It also contained a commander that I had come across during my research, who I really liked, so it was perfect.

We played quite a few games against each other, and I won quite a few, which was a new experience. Usually, I lose to Jason’s decks when we play regular Magic, so naturally, the Commander format has quickly become my new favorite format. For those who may be interested, I played a Naya deck(red, green, white) named Primal Genesis, and Jason played a mono-green deck. His commander is Eladamri, Lord of the Leaves and my commander is Ghired, Conclave Exile.

Our friend, Jason Zapata is in the process of building a commander deck as well, and I’m looking forward to when the three of us can play together.

Next, I decided to get a booster box of Theros Beyond Death, the latest Magic set to be released (as I write this), to use for doing a paper draft, splitting the cost three ways. It was something that I really wanted to try in person, after having completed many drafts through MTG Arena. I thought it would be a lot of fun to draft with both Jasons and then play our drafted decks against each other. Plus, I really liked the theme of Theros Beyond Death, all of the cards were inspired by Greek myths. Since there were only three of us, we each took six booster packs and built two decks. We opened one pack and passed it to the right, each time switching which pile we put the card in that we chose, one pile for deck one and one pile for deck two. The next booster pack was opened and passed to the left and the process repeated until all booster packs had been opened and divided up between the three of us and each of our two piles. Each booster contained at least one land card and one token or place holder with an advertisement for Magic, those were placed in a separate pile in the middle of the table.

We each took some time to prepare our 40 card decks, which is the minimum for draft matches, unlike the normal minimum of 60 for regular matches. The boys were done faster and played each other while I finished my decks. I finished just as Jason beat Zapata with his first deck. I was up against Jason next and met with a similar fate. That fate stuck for the next two matches against Zapata and the last one against Jason. I am not afraid to admit, I am bad at drafting. I don’t do well online in Arena and this first paper draft wasn’t different. But, I have high hopes for the second draft, as we still have 18 packs left. In addition to the Theros Beyond Death booster box, I also ordered a box set of Unsanctioned. This was the latest format in a history of crazy Magic formats (Unglued, Unhinged, Unstable). The point of the Unsanctioned box set is for two players to combine two out of five 30-card decks each, to play against one another and let the craziness ensue and “stretch the limits of what magic cards can do”.

Jason and Zapata were the first to play this set, after dinner on a recent game night. They had finished eating first and I sat down to watch them while I finished my food. The week before we had watched Loading Ready Run, one of our favorite Magic streamers (also a group of Canadian improv comedians who have released a huge amount of online content that we really enjoy), play each other with Unsanctioned and it really looked like a lot of fun. Our game did not get as crazy as it can, but it was fun to watch and I’m really looking forward to getting a turn against either Jason.

We do not have any specific plans for other formats or new Magic sets to try. But, because we had so much fun with one paper draft and will undoubtedly have fun with the second, we are thinking of waiting until the next set is released in April and getting another booster box. The upcoming set to be released will be Ikoria: Lair of Behemoths, which just sounds really cool. I haven’t looked into any of the early spoilers for the set, but I’m imagining monstrous creatures like leviathans. Aside from that, I think it would be interesting to try Canadian Highlander as a format. Canadian Highlander is very similar to Commander, except you don’t have a commander, just a deck of 100 individual cards. This is something else we have learned about thanks to Loading Ready Run, since they are Canadian, it’s a format they play and record about often.

They have an entire podcast dedicated to the format, which you can listen to anywhere you can find podcasts, or watch on Youtube. They also have a Magic podcast, RPG podcast, wrestling podcast and more, in addition to all of the content they stream on Twitch and upload to their Youtube channel. There is something for everyone: horror games, simulator games, Minecraft, MTG Arena, Road Quest (a 10-day road trip with three cars containing only a driver and one passenger up through British Columbia and into the Yukon). Definitely worth checking out!

Aside from Ikaria and Canadian Highlander, there really isn’t much else in the works. Except, for more games of Commander and Unsanctioned, paper drafting, and just more Magic in general.