Minecraft: It’s Not Just For Kids… 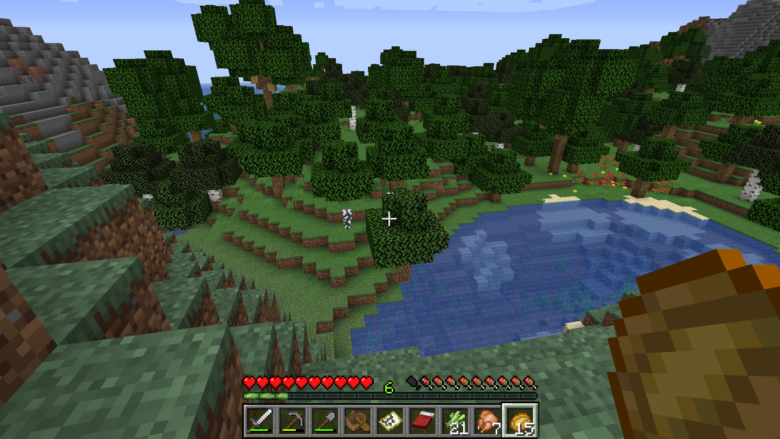 My boyfriend, Jason, recently purchased the latest Java edition of Minecraft. We had been watching twitch streams by one of our favorite Canadian streamers, James Turner of Loading Ready Run, where he regularly played Minecraft for the Loading Ready Run channel and well as his own channel. After weeks of watching James “Punch A Chunk”, where he would mine a 16×16 square for resources, we decided that we wanted to give it a try as well.

I previously used to think Minecraft was a game geared towards children, having only been around children who played it. Watching the streams that James and his friend Serg, also of Loading Ready Run, broadcast made me realize it’s a game for adults as much as it is for children. In addition to the actions you do, which are made obvious by the name: mine and craft. There are a variety of modes you can play, and there is no one right way on how to play. You can spend your time being creative and building things in Creative Mode, or you can gain experience and skill surviving against a litany of “bad guys” in Survival Mode. You can even travel to a different realm for a chance at special materials. One day can be an Adventure Day where you seek out new areas and collect items not found in your initial spawning area, and another day can just be the repetitive action of using a pickaxe to mine resources around your home. The repetitive action of mining was actually something that appealed to me, something not quite mindless, but monotonous and in a good way in order to pass time while still being fun. What makes this game great for adults, is that it gives you an outlet for being creative and using your imagination. I don’t know about you but I feel I rarely get to use my imagination to such an extent as when I play Minecraft. As an adult playing the game, you can put design and engineering knowledge to good use while also being more grandiose and exact with builds in the game. A fortress with multiple levels and interconnected buildings or a lighthouse built with mathematical precision, while simultaneously farming crops and raising animals, or training villagers for specific job roles so that you can trade with them at an advantage. There is just so much to this game, that I never would have expected, until I started playing it myself.

Even punching a chunk or mining resources in general has its challenges, and is not so straight forward. First off, you spawn in the game with no tools and have to make them by chopping down wood with your bare hands, which is easier than you would think, it is a video game after all. You can use the wood to build a crafting table which will be your device for making everything you will need to start out with. You can proceed with wooden tools and use them to mine stone and build stone tools. From there, you continue to mine until you find iron, gold, emeralds, diamonds, granite, diorite and often caves and mine shafts full of hidden goodies.

Where it becomes not so straight forward, is when you come across the challenges you have to face in the game, especially in Survival mode. I previously mentioned that you have a spawning point in the game, a location where you first show up. The location appears to be chosen at random and you could find yourself in any one of the games many different biomes. For example, there is a mountain biome, jungle biome, forest biome, grasslands biome, ice biome. They range in size and all border other such biomes, so that you can go explore them all. In addition to that, there are at least two more “worlds” to explore aside from your home and those are the Nether and the End. You have to build portals to travel to these two worlds and each has creatures specific to those areas. Collecting resources from the Nether actually helps you find the portal to the End, so named as it is literally the end of the game where you fight a mighty dragon.

The reason I point out the biomes and the worlds, is to mention the different threats that each includes. You have your general monsters that wander throughout all the biomes, such as creepers who blow up when they get near but can be fought to produce gunpowder, and skeletons with bows and zombies. However, each biome also has additional threats, you also can be unfortunate enough to have a pillager fortress in your backyard. And those could be all of the creatures you have to deal with if you want, you don’t have to go seek out the End and fight the dragon, you could just play around in the regular world and leave that for a later time. Again, there is no wrong way to play the game, it is all entirely up to you on how you want to play and what type of creatures you want to become an expert at fighting. There are ways to reduce the number of monsters and creatures you have to fight. You can create light sources like torches and lanterns, which can produce enough lighting to keep creatures from spawning near you. You can also put carpet down in your home to ensure creatures don’t spawn in your house, because they can spawn on any type of surface and material that is not carpet, glass, or half blocks of wood, stone etc. You can even tame animals and have them protect you from monsters, like wolves, llamas, and horses. I myself have put a ton of torches on and around my house and no longer have anything spawning on or in it, but that does not keep them from wandering over from a nearby chunk if they happen to see me. I also have a silverfish problem in my chunks, which can be a real pain to deal with, but can help with your mining sometimes as they explode out of blocks of stone. If you manage to kill all of them that come after you, you won’t have to worry about them for a while

But all that aside, I have been having a lot of fun with this game, and doing various things. Since I spawned in the mountains but also near the ocean, I built myself a lighthouse, following my boyfriend’s example, who is using them as a means to find his way around. I have animals; six chickens that live in my house, and a llama that previously lived in my house but now has a nice spot outside with my handful of sheep and a cow. Also outside is my garden, which currently contains wheat, potatoes, and pumpkins. I would love to grow carrots and melons as well, but will need to explore more to find some that I can bring back to plant in my garden. And yet another idea I borrowed from Jason, my boyfriend, is building roads out of the surplus cobblestone I have accumulated from mining, so that I will easily be able to explore and find my way back home without having to look up my coordinates.

So as you can see, this game has so much to offer, and Mojang(the company behind Minecraft) are about to come out with a new Minecraft game called Minecraft Dungeons, which takes Minecraft and combines it with DnD-like dungeon crawling for an action-adventure game. In addition to that, they also have a newer version of Java, 1.16, set to come out sometime between June and August this year, which will offer a major update to the Nether. For anyone interested in getting into the game, I highly recommend it. Whether you have kids or not, as I mentioned before it’s just as much fun for adults as it is for kids. If you have kids, get it for them and then play it with them, make it a family activity. Then secretly play at night after the kids have gone to bed, don’t worry, I won’t tell.