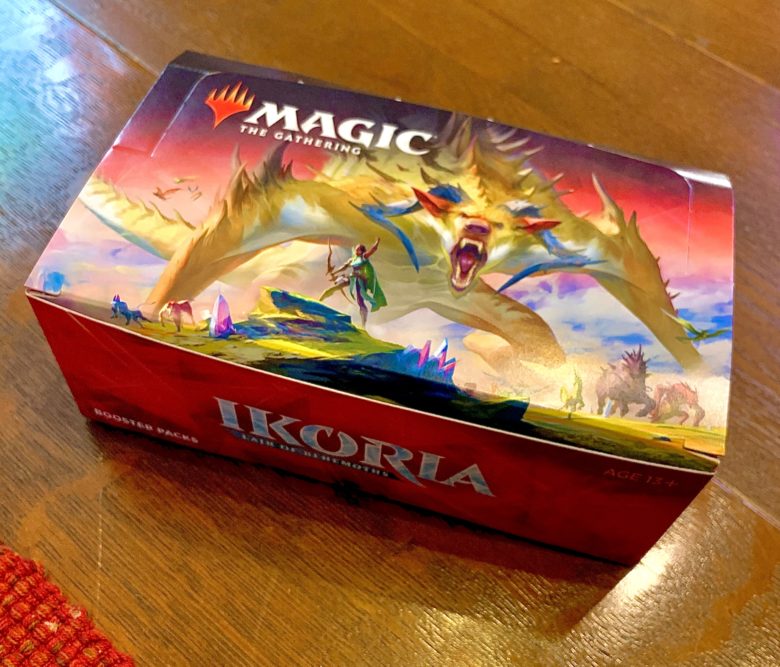 That’s right, Godzilla. The Japanese king of monster movies has wound up in the latest Magic the Gathering set, and he’s brought friends. I was very excited when the new set was announced and revealed to include alternate art and card names of famous Toho Studios monsters like Godzilla, Ghidorah, Mothra, and all the different types of Godzillas: Mecha, Space, Baby, etc. Each one with the name of the actual Magic the Gathering counterpart card included, plus an additional “comic book” style version to collect as well. And let me tell you, there are some pretty cool looking cards in this set.

Ikoria: Lair of Behemoths, as the latest set is called, was released to Wizards of the Coast’s(WotC) newer online platform, Magic the Gathering Arena in April, followed by a postponed paper release in May. Due to Covid-19, WotC had to delay the release and shipping of the paper set, which normally would have been simultaneously released with its online version. The delay did not stop people from pre-ordering their booster box of the new set, and we were among them, because as a special incentive WotC included a buy a box promo of the Godzilla King of Monsters card with every pre-order AND a box topper in every box. The box topper had the chance of being another alternate Godzilla type card. Our first one was Space Godzilla, the unfortunately named Death Corona, which was named such because Corona translates to Crown, and was done so long before the world knew of the virus.

You also may have noticed I said first. Yes, my boyfriend, Jason, and I purchased two boxes, because that is how much we fell in love with this set after the first box that we drafted together. My box topper was Ghidorah, the third card I was hoping to get, after Godzilla and Mothra. I have two of those now, and sadly no Mothra yet. My Ghidorah box topper also arrived bent, having slipped to the front of the booster box and was curved by the packs. I contacted WotC and submitted a claim, and after including the product code and photos, WotC processed a replacement, and I got to keep the damaged card. I have tried flattening it under a heavy box, and it has mostly straightened out, which is good. But I also applaud WotC and their great customer service.

With our two boxes of Ikoria, an Ikoria pre-release kit, a previous box of Theros Beyond Death, and my game night set that Jason bought me for my birthday last year, I have a nice little collection of Magic cards going that has now outgrown the storage box that Jason gave me. I have some cool deck boxes, a few specifically to hold Commander decks, and now that our local game store has reopened(with limited access), I hope to expand my storage boxes soon. Especially with a new set on the horizon.

A new set, you say? But didn’t one just come out? Yes, and it seems like it’s so soon, only because Ikoria was delayed to May instead of it’s original April release. The next set, Core 2021, was slated for a July release since the beginning, just like Ikoria was slated for April. And I am just as in love with Core 2021, but this post is about Ikoria, so stay tuned in the future for my thoughts on Core 2021.

For Ikoria, I love the new game mechanics introduced, just as much as the cool new creature and human cards. WotC introduced two new mechanics, mutate and companions.

The mutate mechanic is interesting and unique to Ikoria, no previous Magic set had this mechanic. With mutate, you have a separate mutate cost (separate from the cost to cast the card) and when you spend that mutate cost you can choose to place that card either on top of or below another non-human creature. The top card then has all the abilities listed on it and the card below it, in essence the two creatures have mutated into one. It’s a fun thing that ties into the theme of Ikoria and the crystals of that particular plane that cause these mutations to happen. The companions on the other hand, are specific cards with the companion mechanic which calls for a specific rule to be followed for that companion. For example, one companion may dictate that all cards in your deck have an odd number for its converted mana cost (the cost to cast the card), while another may require that all creatures in your deck be a creature power two or less. However, it did not take long for certain companion cards to become very powerful in the current meta. In fact, one companion was banned from certain formats the very day the set was released, and now the rest have been nerfed to have an additional cost to cast them. That is if you want to use it as a companion. You also can use it in your deck as just a regular card, where you get whatever their ability is without having to conform the deck to the companion restriction. If you do want to play it as a companion, they can only be played in the sideboard and you have to pay three mana to move them to your hand, from there you have to pay the card’s normal mana cost to play it. The cards are still powerful, but with an additional cost, they are not as easy to play as they once were and it helps to even things out a bit more.

Overall, it’s been a really fun set to play, with interesting cards and fantastic artwork. I have yet to build a new commander deck with my new collection of Ikoria cards, but I do plan to. I just have to figure out who my commander will be, there are so many options, in the cards I have collected, and the new commanders that were put out at the same time as Ikoria. But enough about me, if you are at all interested in Godzilla, or just big cool monsters, then you should check out Ikoria: Lair of Behemoths. And if you do, try getting some packs from your local comic and game store, to help support them.

I will leave you with the Top 5 Cards from Ikora, at least in my opinion. And this was hard to put together for me, there are so many good choices, so I stuck with some cards that I have played repeatedly.

5. Almighty Brushwagg
It’s a one green mana creature with trample, and for an additional three colorless and one green, you can give it a +3/+3 until end of turn. Little guy turns into swoll guy.

4. Auspicious Starrix
A four colorless and one green creature, with a mutate cost of five colorless and one green. When this creature mutates, you exile X number of cards from the top of your library, where X is the number of times this card has mutated, and you put those exile cards on the battlefield. This card has a great deal of value if you can keep it alive long enough to mutate several times.

3. Clash of Titans
For three colorless and two red mana, a target creature fights another target creature, each deals damage equal to its power to the other. Your opponents’ big boys causing you issues? Have them fight each other! 2. Shark Typhoon
For five colorless and one blue mana, whenever you cast a non-creature spell you get to create an X/X blue Shark creature token with flying where X is the converted mana cost for that spell. You can also pay any number of X mana, one colorless, and one blue to cycle the card, which means you discard it and can draw a card, and you get an X/X blue Shark token with flying.

1. Godzilla, King of the Monsters (Zilortha, Strength Incarnate)
For three colorless, a red, and a green mana, you get a 7/3 creature with trample, whose abilities make it a 7/7 and boosts the rest of your creatures. Lethal damage dealt to your creatures is determined by their power instead of their toughness. Plus, Godzilla! This is the one that reminds me of the city smashing monster movies, and it was also the buy-a-box promo card that we received. It’s a foil card, so it’s shiny and pretty and is fun to play with other big creatures with a high numbered power for a monster smash deck.