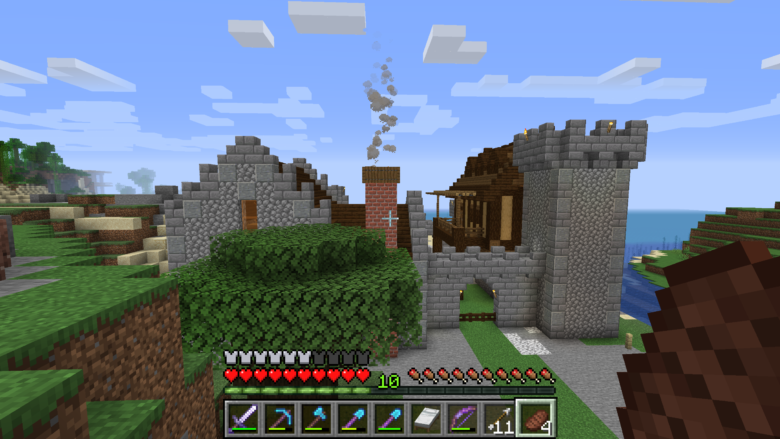 A couple of months ago, I wrote about my new obsession with and love of Minecraft. Now that both me and my partner, Jason, have been playing for some time, each with our own world, we decided to try out something new. We bought a second Java version of Minecraft, set it up for me, so that we could play together in the same world using Minecraft’s multiplayer functionality.

This is something that Minecraft has had for a long time, and we have watched some of our favorite streamers play together on the same server. Now it was time for us to give it a try. We watch our favorite Minecraft streamer, James from Loading Ready Run, on his personal channel together all the time. Usually on separate devices, but if it happens to be around lunchtime, then together on the living room sofa, with James up on the living room TV. It’s the same for the Mine O’clock show that James does for Loading Ready Run, on Tuesdays, where he plays with friends Serge and Uno. That multiplayer stream, even more so than James’ solo stream, is what really inspired us to get started with our own multiplayer Minecraft game. I was happy to finally be able to play together. Jason had gotten a hang of getting villagers to trade with a lot faster in his world than I had. He also had plenty more resources and access to more animals. I had spawned in a bad spot and was far away from any villages, but he had found several and had far better tools for all of his mining and building than I did. It had also taken me a long time to collect the few sheep, a cow, and chickens that I had. I also was in the mountains, where you would think there would be plenty of mining resources, but there wasn’t. So to now have help with getting villagers and trading with them, at a joint base of operations, it made things so much more enjoyable. Not that I wasn’t enjoying playing before, but when things go a bit more smoothly and you have the ability to do more things in the game, it adds a whole new layer of enjoyment.

Plus, the ability to play together, at the same time, has made it something fun that we can do together as a couple. Before we had two accounts, we would take turns playing, in our separate worlds, but now we just need two computers and one account opens a LAN(Local Area Network) for the other account to join. We have taken to playing down in the basement, where it’s cool, Jason in his second office he has set up for himself and me at the table in the main area.

We have taken the things that each of us is good at in the game and made that our job for our joint world. I really enjoy “punching chunks” or mining for resources, farming, and raising livestock, whereas Jason enjoys building. He built us a castle keep, a fishing hut, a barn, a farmer’s house, and a larger keep of a different style slightly further away from our first keep, and they are all interconnected by a tunnel system underneath. As I write this, he is building a woodland mansion in the rainforest we have near a cove a few chunks over from our home. I am not allowed to see it until it’s finished.

In addition to what Jason has built for us in the form of different buildings, he also made sure we had a matching set of things. For example, we have his and hers beds in our favorite colors, his and hers armor stands with armor, and even his and hers chests for our individual items. I had told him one day that I would really like a barn and he built one for me and filled it with cows, sheep, and pigs. It was all very sweet and he continues to create and build things for us, and as a surprise for me. He repairs my tools when I don’t have enough experience levels to do so, and I will go and collect items that he needs for his builds for him, such as wood or wool, so he can finish his builds faster.

That’s why Minecraft can be for couples, as much as it can be for families, for adults, for children, for everyone. So if you’re looking for a game that you can play with your sweetie, then look no further than Minecraft.