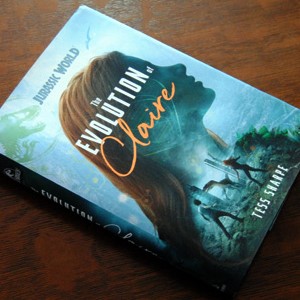 The Evolution of Claire by Tess Sharpe is a great read. It’s a book to satisfy any fan of the Jurassic Park/World franchise of movies. This novel fits nicely in the timeline between the two movie trilogies and offers a look into the life of Claire Dearing and how she first became involved with Jurassic World.

You meet Claire as she has just finished her first year of college and follow her to her first summer internship at, you guessed it, the unopened Jurassic World. The park is still being built, but it’s still a once in a lifetime opportunity for Claire and her fellow interns.

Tess Sharpe does an excellent job of showing us what Claire was like as a young woman. We get to see Claire’s ideals, her goals and dreams, and what made her into the woman we see portrayed by Bryce Dallas Howard in Jurassic World.

It’s the prequel you want, and not just for this specific character, but for the park as well. Especially given that

Jurassic World is itself a sequel to the original park created by Jon Hammond. As Claire is learning through her internship, you learn more about the Mazrani Corporation and the man himself. You gain insight into how such a park is built and run, how the dinosaurs are treated and introduced to their new home, something we didn’t really get with the original movie. At least not in such detail.

And that’s not all. This book is well written and easy to read. It’s considered a teen/young adult fiction novel, but that doesn’t mean older adults can’t read it. And at 400 pages, you would be surprised at how quickly you will want to eat this book up. I thoroughly enjoyed it and the emotions it was able to elicit from me.

I would like to keep this spoiler-free, so I will leave it at that and share a few of my favorite quotes with you. But I urge anyone to pick up this book for the Jurassic Park/World fan in your life, whether that be yourself or a young adult looking for more to sink their teeth into.

“But it’s the truth. It’s what I want. And so often, we’re told that what we want doesn’t matter. So we never even voice it, let alone ask for it or demand it.”

“And then he went and found out. Proved his hypothesis and returned dinosaurs to the earth. That is the power of asking yourself what if?”

“And once the park opens and the public sees all the park has to offer, there will be no question of the importance of the dinosaurs’ place in the world.”

Book photo by Agent Palmer, who also recommended I read this book, through his own book review on AgentPalmer.com.