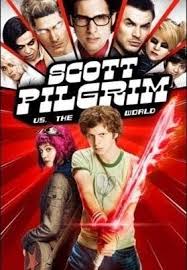 I was recently watching a Twitch stream from my friend TriforceDad1984, where he was playing the Scott Pilgrim vs The World video game which was re-released for the 10th anniversary of the movie. He decided on the game for his Saturday Morning Retro Stream, given both the game and movie have a very retro ‘80s video game theme, despite both coming out in 2010.

I had never seen the movie, having not been drawn in by any of the promotions I happened to see at the time. Of course, had I known then what I know now, I would have watched it in theaters. So, seeing the video game played made me interested in watching the movie, it also didn’t hurt that my partner, Jason, my friend Chris aka TriforceDad, and quite a few people in our Twitch chat had good things to say about it and urged me to watch it.

Since I had seen the video game first, I wasn’t sure what to expect when it came to the movie. Not all video games based on movies, follow the movie plot exactly, but that was exactly the case this time. For anyone not familiar with the movie, the premise of Scott Pilgrim vs. the World is this: Scott Pilgrim a young man in his early twenties living in

the mysterious land of Toronto, Canada falls in love with an intriguing young American woman named Ramona Flowers. In order to date Ramona, he has to first defeat her seven evil exes.

And you read that correctly, he actually has to fight her exes, in a way that can only be described as an ‘80s video game meets comic book, which in itself is a fun concept. But, it’s the music and visuals that make this movie, not to mention a cast made up of just before they were famous actors. In addition to Michael Cera as the main character, Scott Pilgrim, you also have Chris Evans before he was Captain America, Bri Larson before she was Captain Marvel, Brandon Routh before he was Ray Palmer in the Arrowverse shows on the CW, plus Mary Elizabeth Winstead as Ramona Flowers, Jason Schwartzman, Kieran Culkin, Allison Pill, and Anna Kendrick.

With Edgar Wright as the director, it’s no wonder the soundtrack and visual effects are top notch. You might know Edgar Wright from Baby Driver and before that the wildly successful Shaun of the Dead, Hot Fuzz, and The World’s End. All these movies have the same thing in common, excellent choices of music used in action scenes and really fun special and practical effects. With the Three Flavours Cornetto Trilogy, what the three films written by Wright

and Simon Pegg are often known as, you had fights with zombies, aliens, etc. and with Scott Pilgrim vs. the World you have expertly choreographed fights between Scott and the seven evil exes.

Furthermore, music is a huge part of Scott Pilgrim vs. the World. Scott himself is in a band, with one of his exes, his other ex is a pop star that broke his heart and several of the evil exes are musicians themselves. The through line of music that intertwines the characters and storyline is entertaining and makes the film a fun listen, in addition to the visual spectacle that it is.

So if you’re looking to fill a couple of hours in your night, give Scott Pilgrim vs. the World a try, and do try and watch it at night. Some of the visuals would be lost on a viewing during the day, and that would be a shame. So grab your sweat bands and favorite piece of ‘80s nostalgia, pop some popcorn and enjoy!