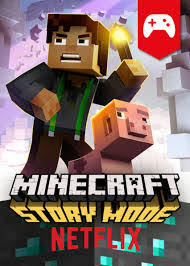 We stumbled across a Netflix show called Minecraft Storymode. It was not something on our radar and my partner, Jason, happened to find it because Patton Oswald lends his voice to one of the main characters. And since we both enjoy playing Minecraft as a couple, and with friends, it was something worth checking out for us.

Initially, we thought it was just a regular cartoon, but it turned out to be something so much better.

It was animated in such a way that made it look very close to the game, but it was also a choose your own adventure story. You start by choosing to play a male character or a female character, both named Jesse. The male Jesse is voiced by Patton Oswalt and the female Jesse is voiced by Catherine Taber, who are joined by a great supporting cast of characters voiced by Brian Posehn, John Hodgman, Matthew Mercer and many more. Then at certain points in the story, you, as the main character, are given choices that you select using your TV remote. Depending on which you choose, one of the options has the chance of affecting the story path you’re on.

I think one thing this adventure does well, is to not reveal if the choice you made was right or wrong. It tells you if the choice you made has changed the course you were on, but having made that decision doesn’t mean you made a mistake, you just chose something different. I really like that and I’m sure it has to do with the fact that this is for children and the idea of punishing a child for making a decision in a cartoon about a game that is also for children, was something that the creators wanted to avoid.

But what does this have to do with a pig, you ask? Well, let me tell you. One of your best friends in the story is Rueben, your pet pig. He looks just like one of the pigs in the game but much more adorable. He also displays human characteristics. He can understand the humans around him, he displays emotions and shows real fondness for his friend, the main character you’re playing. Reuben goes everywhere that you go, even to the town building competition, which is a big deal for you and your friends. Winning the competition gets you and your friends to Build Con, but it’s revealed that your team has lost every year so far, and the “competition” is stiff. Through the choices we made (Jason and I, as we were taking turns making decisions for the male Jesse), our team wins, but not without drawing the ire from another team who tries to set the build on fire and in the process injures Rueben, scaring him off. We chose to go after him while our friends stayed behind to deal with the fire. We spent time searching for him and found him, but not before the sun went down and the mobs of monsters came out. We chose to save him from the mobs by having him run for it, while our character stayed behind to distract them. You, as Jesse, are then saved by another character you know. Later, during the new search for Rueben, we chose to trade our sword, narrowly saving him from a butcher who found him wandering near town. After that, he didn’t leave our side again. He joined us on our adventure and became a part of our heroic team.

You become so invested and attached to your little pig buddy. So much so that at the very end, and this is somewhat of a spoiler, Rueben helps you save the day and is thrown from a great height. There is an emotional goodbye with two choices, “Rueben, I need you” and “I’m here for you, boy”. We chose the first option and I hoped the power of love would heal him. Rueben lifts his head, and smiles, before falling still. I was shocked and watched the rest of the episode with tears streaming down my face. Rueben gets honored and remembered as a hero. But you can better believe I want to go back and try the other option to see if he gets healed.

That’s how attached to that pig I became. But I somehow think that was always going to happen, so that he would forever be remembered as a hero. It doesn’t make it any easier, the loss of poor little Rueben. I do have to say that I also like that he is not forgotten as the story continues, your character continues to think about him and miss him. Yes, the point in the story when Rueben dies is not the last episode of the show, there is still more to go through and experience. I was honestly happy to have more. There was humor, which the story had throughout, and it helped with the sadness. The entire show and story is just so well done, well written and well acted. I’m not going to give away any more spoilers but I do highly recommend everyone check out this Minecraft choose your own adventure on Netflix. Especially if you’re a fan of Minecraft or know someone who is. I plan on going through it again myself, since the great thing about a choose your own adventure series is that you may get different results the next go through. I also want to play as the female Jesse this time, voiced by Catherine Taber. To see what the new character brings to the story, since I’ve already experienced it through Patton Oswalt’s Jesse.

This would be perfect to occupy children for an evening and the adults would have just as much fun. Do it for Rueben, he’s worth befriending!