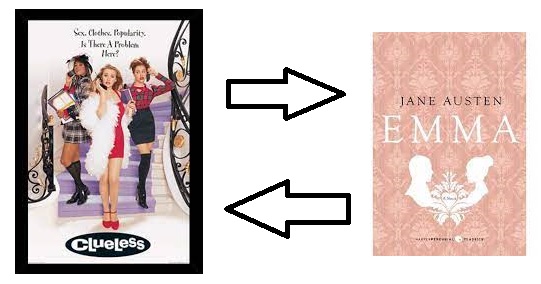 I recently watched the 2020 release of the movie Emma. It was a movie that I did not have a chance to see in theaters, so I was happy to see it promoted as the Movie of the Month on the IMDbTV app. It was a great film and another adaptation true to the wonderful Austen novel. Watching the film, however, reminded me of an idea that I had had when I wrote and posted my original post about Emma and my comparison of the novel and its many adaptations. The idea being a comparison between Emma and its modern reimagining, the movie Clueless.

The ‘90s saw many themes arise, but one that flourished was taking classic literature and giving it a modern movie spin. You had some of these takes on the written word being quite literal (pun intended) while others were very subtle. Most notably you had the Shakespeare adaptations: 10 Things I Hate About You, Romeo + Juliet, and Disney’s The Lion King. 10 Things I Hate About You was adapted from the Bard’s Taming of the Shrew, whereas The Lion King borrowed from Hamlet, and of course Romeo + Juliet took the written words and paired them with a modern soundtrack and setting.

Then came the more subtle adaptations: She’s All That, Cruel Intentions, Clueless. She’s All That offers a modern take on My Fair Lady, but both are an adaptation of the George Bernard Shaw play Pygmalion. Cruel Intentions is based on the 1782 French novel by Pierre Choderlos de Laclos called Dangerous Liaisons. This of course brings us to the topic at hand, Clueless and its satirical take on Austen’s wealthy and naive character Emma in the form of Beverly Hills highschooler Cher. Clueless, for those who may be clueless as to the movie’s plot, follows Cher played by Alicia Silverstone and her friends as they navigate life at an affluent Beverly Hills high school. Cher is sixteen, beautiful, wealthy and at the top of the social food chain at her school thanks to her zip code and her totally it fashion. She has a knack for matchmaking, or at least she thinks she does, and she uses her social standing in the school to take a new girl under her wing and make her all that amongst their peers. Which is quite literally cut out of the story of Emma, who also sought to elevate a young nobody into a high society somebody.

Oh but the comparisons don’t end there. Cher lives alone with her divorced father, a very successful lawyer played by Dan Hedaya, who gives her everything she desires and leaves her very much to her own devices. We don’t learn a lot of her mother, but Cher’s step-mother, or former step-mother, has recently moved out and while that relationship may have ended, the family still has a good relationship with her son and Cher’s step-brother Josh played by (the ageless wonder) Paul Rudd. Josh is in University and studying pre-law, but also happens to be helping Cher’s father with a very important case, requiring him to hang around the house quite often. If we take a look at Emma again, it’s very nearly an exact match. Emma lives alone with her father, her mother having died when she was young, and Emma too is left very much to her own devices with want of nothing in her life, being completely provided for thanks to her father’s wealth. There is also the gentleman, Mr. Knightley, who spends much of his time with Emma and her father as a neighbor and close family friend. Again, similar to Cher and her older step-brother Josh.

If we put Rudd aside as the “older family friend” with whom love blooms a la the love in plain sight trope, what other similarities can we focus on between Emma and Clueless? The match-making is a big one. Emma prides herself on having brought together a widowed nobleman and her governess resulting in a marriage and likewise Cher brings together two of her teachers who begin to date. Emma chooses to elevate the status of a young girl she barely knows in the effort of finding her a proper place in higher society and Cher does the same thing with the new girl in town Tai. A new transfer to the school, Tai becomes a project for Cher who tries to turn her into one of the popular girls to catch the eye of Elton, one of the popular guys. Even the name Elton is taken directly from Emma, matching the one of the characters of the novel. Then there are the romantic issues both young women experience that mirror very well. Emma is obsessed with the handsome and flirtatious Frank Churchhill who is revealed to be secretly engaged and unavailable. Cher equally is smitten with Christian, another new face in school whose interest she mistakes for romantic interest but this is quickly proven wrong as well. Although its not because of a secret engagement, Clueless goes in a much more modern direction insinuating that Christian is gay.

And lastly we have the matching happy romantic endings. Emma realizes her love for long-time family friend Mr. Knightley who reveals he has also loved her for some time. Cher realizes she is in love with Josh and he likewise, though their relationship is a bit problematic given Cher is underage, she is only sixteen after all while Josh is twenty-one or twenty-two. As long as they waited until Cher turned eighteen, then there are no issues there and it’s not a huge age gap. Emma is twenty-one and Knightley is around thirty-six which is a sizable age gap, but they were at least both adults and that type of age gap was not unheard of during Austen’s time.

So there we have it, some very notable similarities between Clueless and Emma. Of course, Clueless did take liberties with the story in order to bring it to the modern audiences of the ‘90s, but the influences are many and purposeful.