In the Footsteps of the Brothers Grimm: My Recent Trip to Germany 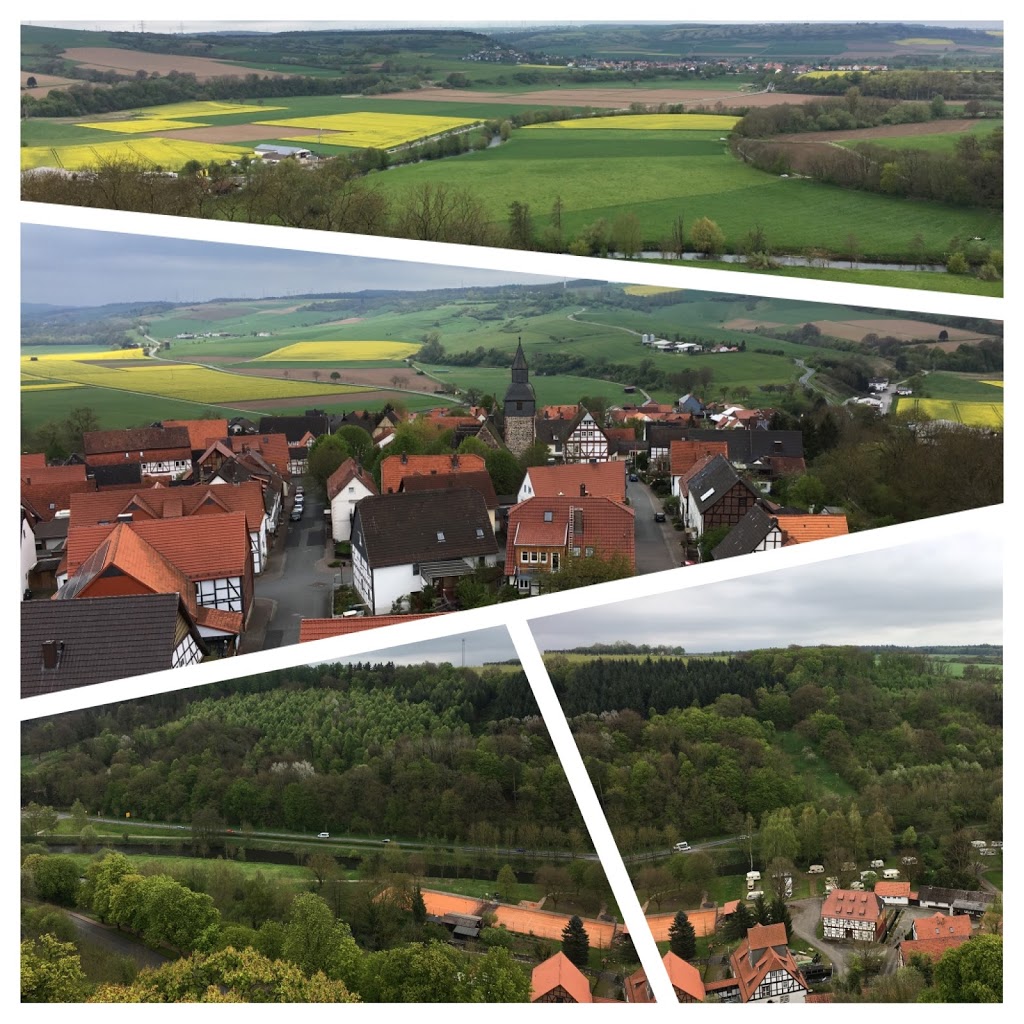 I recently returned from Germany, where I was visiting my grandparents and family. It was great to be back again, after nearly two years. The weather wasn’t the greatest but it was a nice change and we did have a few partially sunny days. Most of the time, it was cloudy and cool, as some of my photos will show, but we came prepared with jackets.

Most of our two week trip was spent in my mother’s home town of Bad Sooden-Allendorf with my grandparents. A few days were spent with the rest of our family: a trip into the city with my aunt, grilling with my cousin and his family, and Greek food with my other cousin and her family.

For the first time, we rented a car instead of taking the train from Frankfurt to Bad Sooden. It gave us the mobility to not only do some shopping for my grandparents but also to go exploring. A burg(a medieval fortress), which inspired the tale of Rapunzel, was where we wound up. Initially, we had planned to go further south but the weather in Bavaria was much colder and there was a lot of construction on the autobahns down there according to our family.

Despite my numerous trips to Germany over the years, I have yet to explore most of it. We tend to spend a lot of time at home with my grandparents, which I don’t mind at all, but that does mean there are still a lot of cities to visit. There is so much rich history in a place that has been a country for centuries upon centuries longer than the United States. From King Ludwig and his impressive famous castles, to the green rolling hills and thick forests, the mountains in the south, the seaside to the north, and more castles and burgs than you can imagine. Bad Sooden-Allendorf is located in Northern Hessen and not many people (outside of those that live there or have visited) have heard of it. But some may have heard of Kassel or Hanau, two cities located just under an hour west and two hours south of Bad Sooden, respectively. Kassel is special for many reasons, but one that has always fascinated me is its connection with the Brothers Grimm. Germany’s most famous storytellers, Jacob and Wilhelm Grimm, were born in Hanau and lived in Kassel during the time they pieced together their collection of fairy tales. Now that I’m older, and through the power of the internet, I can research the Brothers Grimm and their old stomping grounds. These stomping grounds just so happen to be all over Hessen and make for a lot of neat places to visit within hours of my mother’s hometown.

Since I was a little girl, growing up in Germany, I was told countless stories and myths about the area by my grandparents. One in particular, which my grandfather made up but I held as fact as a child, was a story about the local castle, Rothestein. The castle with the 7 daughters, my grandfather used to say, as he told the story during a break from a bike ride. We would stop along a field on the outskirts of town and look up at the castle sitting high up on a nearby hill. A wealthy count lived in the castle with his 7 daughters, whom he was seeking to marry off. I don’t remember much of the tale, but the part about the 7 daughters living in the castle stuck with me and I remember so badly wanting to meet them. In our family, it has always been called the Castle with the 7 Daughters and it was years before I knew its actual name. A local count did own it at one point in time, but he never had 7 daughters. But that story did begin a lifelong fascination with castles and fairy tales.

I have been to all of the local burgs and castles near Bad Sooden. So for this trip, I was excited to check another off the list, and visit Trendelburg to learn all about its connection to the Brothers Grimm. This burg(a case where the fortress and the surrounding village have the same name) has been modernized, at least in the main building which is now a luxury hotel. But its tower is still largely in the original condition, along with the walls and foundation of the surrounding area. The bridge over the steep drop off was rebuilt with sturdy wood to create a new walkway, which, I would like to believe, used to be a draw bridge at one point. Even the main entrance was built for deterrence, in that it is smaller on the outside and grows taller on the inside leading to the inner courtyard. You have to bend as you walk through it. For a nominal fee, you can explore the old tower which has been turned into a medieval museum featuring armor, weapons, Rapunzel artwork, and a dungeon below ground full of torture devices. It was dark and creepy but also fascinating. Not to mention, it was quite the workout. Climbing all the way to the top, back down, then further down and back up again. Half of the steps were nothing like the stairs we are accustomed to today. They were cut and carved from large stone blocks, making for an uneven and clunky stroll up or down.

After you’ve finished exploring the tower, you can enjoy a meal or coffee (tea for those who don’t care much for coffee) and cake in the restaurant. It is also staged in a medieval atmosphere with antique furniture and suits of armor. For 10 Euros you can purchase your drink in a commemorative Trendelburg coffee cup to take with you when you leave, which I did. It’s a nice souvenir that is also functional.On the way out, we made a new friend named Spider–an orange and white cat. He (I think it was a he, with a name like Spider) watched us press a 5 cent coin into another souvenir and take pictures with our faces in a Rapunzel cutout. Then it was back to the car for the drive home, where we made it back just in time to eat dinner with my grandparents and tell them all about our trip. It was a great day, and a great trip.