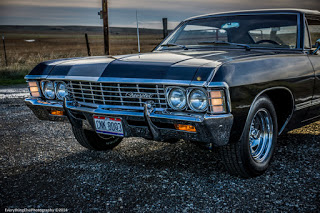 Everyone has that one thing that reminds them of their favorite show or movie, whether it be something about their favorite character, a song, or a vehicle. So let’s focus on the vehicles that people love, shall we? The Mystery Machine from Scooby Doo, the General Lee from Dukes of Hazzard, Kitt from Knight Rider–there are so many. But for me it’s a certain 1967 Chevy Impala, affectionately known as “Baby” by the Winchester Brothers of Supernatural. The car has been a staple of the show since its inception in 2005 and has quickly found its way into the hearts of the cast, crew, and fans alike. It’s definitely a dream car, to the extent that I have looked up ’67 Impalas for sale online. I know someone in Las Vegas who owns one, and have seen others put on display at conventions by their proud owners. I’ve developed the same affection for this car as they have, with the small exception of me not having a “Baby” to call my own. Since that’s not going to be a realistic goal any time in the near future, I would settle for a temporary solution for now.

So imagine that exact type of solution presents itself. You rent your favorite car for a road-bound getaway, seated behind the wheel of a vehicle straight out of your dreams. A vehicle you rented from a company, similar to renting a car from an airport. One such company is setting about the task of making that a reality. Turo, a car rental company based out of San Francisco, is in the business of renting out pop culture inspired vehicles from TV shows and movies. Not only that, but they offer all sorts of vehicles (listed by their owners) for rent, from family cars to luxury sedans. Fancy a cruise around town in the Ford Escape Aviato from Silicon Valley? Do you want to roll in style in a Mercedes C-Class or a BMW 3 Series? Well, then Turo is your destination for fulfilling your transportation-themed guilty pleasure. Naturally, a company like that would peak my interest. If they ever landed a ’67 Impala, I’d whip my credit card out so fast, my wrist would have whiplash. The possibilities that could be achieved through renting a car like that, would certainly result in nothing less than a road trip of epic proportions, regardless of where you went. But, what kind of story teller would I be, if I just left it at that? If I didn’t at least share some possible destinations?Many Supernatural fans (myself included) would tell you how much shared affection there is between them and the brothers over this car. Also, the jealousy felt when Dean and Sam get to criss-cross the country inside one of the coolest muscle cars on TV today. The Impala is their home on wheels, their lifeline to other places, their ever-reliable symbol of family, strength, and resilience. Small towns and big cities, paved highways and dirt roads, the Impala has seen its fair share during the show’s 11 year run. I crave my own road trip behind the wheel of a 385 horse-power Turbo-Jet 427 engine, with sunlight gleaming off the mirror-like Tuxedo Black paint–hunting down adventure rather than demons and monsters.

It isn’t hard to decide where I would go, if given the chance to drive that car. A car like that has plenty of space to allow you to

stock up on supplies for any length of trip. Be it a few days or a couple weeks. I would aim for the gorgeous picturesque routes first. I’ve always wanted to go to Yellowstone, Mount Rushmore, and travel cross-country along what used to be the iconic Route 66. This is the type of car that would turn heads away from the gorgeous views of the Pacific Highway. It would draw attention from all the tourists at the Grand Canyon. I would want to show off the beaming headlights rolling down the glittering Vegas Strip. Spend a sleepless night in Seattle, star-gazing on top of the hood. The possibilities are endless.

The hard part, who would I take with me? As much as I would like to take everyone with me to experience the awesomeness that is the Impala, it’s not exactly a tour bus. You’re looking at probably 5 people in the car at once. Even if your passengers are cool with getting super chummy and all up in each other’s personal spaces, the back seat could really only hold three adults semi-comfortably. Add the driver (who picks the music), and your passenger riding shotgun (who shuts their cakehole, because the driver picks the music), you have a full car load of five adults ready to seek adventure in their favorite car. It would have to be fellow fans of the car, with whom you share your road trip, only they would accept you swooning over a car nearly 50 years old. A car once again made popular by a TV show, known for its heart-throb leading men. But the car is a beauty all on its own, and as sexy as the day she rolled off the assembly line. I have quite a few friends that understand that about this car, and they would have first dibs at filling those three to four open seats.

Now much like the show, I would not exclude family from taking a cruise with me. I would hope that they too would be excited. You don’t have to be a fan of the show, or a major gear head to be able to appreciate a car like this.It is, after all, a badass, sexy, muscle car. A blast from the past. They just don’t make them like this anymore. From its shiny metal grill, to its leather interior, large size trunk, and four doors convenient for any family. This car has so much going for it. Chevy did make a two-door version, but it just isn’t the same. For one, you wouldn’t be able to fit as many grown adults into the sports version. The coupe also just doesn’t have the same gravitas as the larger sedan, a gravitas which would make the modern sorry excuse for an Impala feel ashamed. The Impala of yesteryear is the perfect blend, a muscle car made to endure the long haul of the open road and the wear and tear of everyday family use. It is a gender neutral vehicle that makes anyone look cool.

Now, you may have noticed the gorgeous Impala photographs used in this very post. All of these photos were provided courtesy of Eric from Everything Else Photography and used with his permission. If you would like to see more from this particular Impala (owned by the photographer himself), or other amazing photography work, please check out his website.So what else is there left to say about my obsession…I mean…fondness for the ’67 Chevy Impala? Nothing really. Hey Turo, help a girl out?