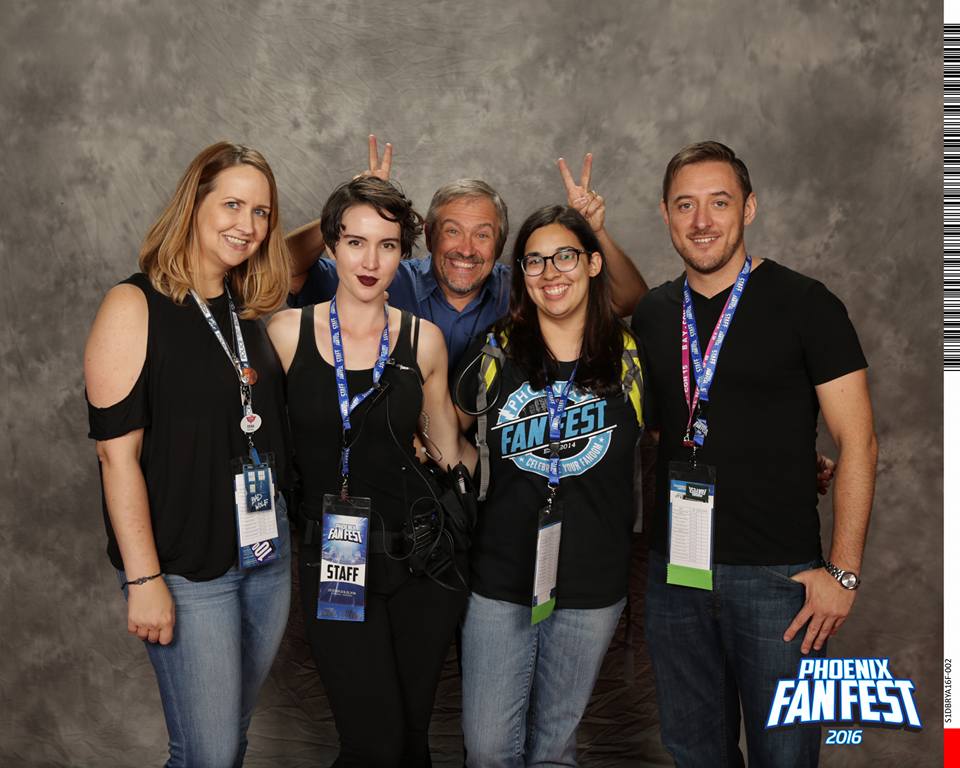 Just over two weeks ago, I once again volunteered for Phoenix FanFest. This is the smaller convention associated with Phoenix Comicon, held in the later part of the year. We ran for two days this year, Saturday and Sunday, and wound up at the downtown convention center instead of the football stadium from previous years. Another new thing for FanFest this year was the addition of wrestling stars from the WWE. So, there was an interesting new mix of fans wandering around but also a good amount of crossover. This is a quick recap of that weekend.
I was again working in the celebrity photo booth as volunteer staff. We spent Friday evening on refresher training for all volunteers and running a stress test on the camera and computer equipment. Then it was off to the races on Saturday. I arrived prior to the hall opening and assisted with last minute checks and preparation to make sure everything was ready for our first photo op that morning. As the rest of the staff trickled in, some of us went for a quick tour of the vendor hall to scope things out and get a lay of the land so to speak. Just before the doors opened, we found ourselves at the Con Man booth, home to merchandise from the Nathan Fillion and Alan Tudyk comicon-themed show. For FanFest staff, the booth was selling autographed lanyards from Alan Tudyk for $5. Not wanting to pass up a deal, we rushed back to the photo booth to grab cash and quickly rid the nice man of six of his lanyards. This was just as the hall was opening and we made our way back to our area as the attendees converged on the vendor hall.
The vendor hall not only contain all the vendors and the celebrity photo booth, but was also where all the celebrity’s autograph tables and the big costuming groups were. Unlike Phoenix Comicon where everything is spread between four floors and a hotel, FanFest was easily contained on just the third floor of the convention center–except for some panels on the second floor and registration in one room on the first floor. There was still some amount of walking (mostly between the parking garage and the convention center), but with vendors and food much closer, it wound up being more a case of standing. My feet were sore by the end, but not as bad as they could have been, had I not switched from my chucks to tennis shoes the second day. The food left something to be desired, but it was free with our food vouchers, so I can’t really complain there. Our first photo op for the day was the duo of Brett Dalton and Elizabeth Henstridge from Agents of Shield. They were both so great with their fans and funny. We cycled through the duo photos and then split into solo photos with Brett Dalton first, followed by Elizabeth Henstridge. Going into the noon hour, we had Tim Rose of Star Wars fame (Admiral Akbar), followed by Tahmoh Penikett from Supernatural and Battlestar Galactica. Rounding out the hour was the duo photo with David Harbour and Millie Bobbie Brown from the hit Netflix show, Stranger Things. The rest of the afternoon was dedicated to the photos with WWE Superstars: John Cena, the Bella Twins and Daniel Bryan. In addition, we had solo photos with the Stranger Things cast, and a couple “old school” wrestlers: Jake “The Snake” Roberts and The Honky Tonk Man. Once the photo booth had shut down, we cleaned and reset everything for the next day. We then surprised ourselves by leaving the convention center before the vendor hall closed and having dinner as a group at a normal dinner time. It’s small things like this that really make FanFest such a relaxed event compared to the bigger show. I’m not complaining about the busier larger show though, I wouldn’t trade Phoenix Comicon for any other convention in the US, I love our hometown convention. So, Sunday rolled around, with an even lighter schedule than the preceding day. The WWE stars had only been there on Saturday, along with Millie Bobby Brown. We started the day with a late morning shoot, 11:00am, with Tim Rose. Lunch time was spent running photos with David Harbour and Jake “The Snake” Roberts and the afternoon was rounded out by Brett Dalton and Tahmoh Penikett. That was it, the booth closed at around 2:00pm and was nearly completely broken down and packed up by 4:00pm. But not before we took our team photo. We were then free to wander the vendor hall for the rest of the time. I shopped, chatted with a comic book guest I knew, and wandered down every single aisle. I finished in about 45 minutes and headed home.
It was a short and simple couple of days, but I enjoyed it. I was happy to get some great photos and spend time with a great group of people. Now, bring on Phoenix Comicon 2017!
arizona convention
0
Previous Post
Next Post