Through Stories Untold and Theaters Unnumbered

By Stefanie Muniz on Wednesday, October 5, 2016 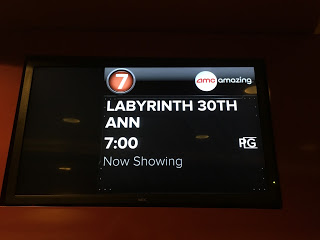 To celebrate the 30th anniversary of Labyrinth, Fathom Events brought the 1986 classic to movie theaters across the US in a limited release. In Phoenix, the event was in conjunction with AMC Theaters, and they were not kidding about the “limited release” part.

There was one theater in the greater Phoenix area showing the movie–in Ahwatukee–which is just under 30 minutes away on the freeway. Given that the next closest theater was an hour away, the drive to Ahwatukee was nothing. I went with my mother. She’s seen the movie almost as many times as I have, considering it was a childhood favorite. It had also been forever since we’d gone to see a movie together, so it was nice to get out of the house for a fun girls’ night.

Although, it was almost the girls’ night that never was. We originally drove out to Ahwatukee on Sunday evening, only to get to the theater and find the showing completely sold out. I was really bummed. To make it so our drive wasn’t a complete waste, we went to a wine bar next door. We had some very tasty hummus and shared a wine flight. But, before we even received our appetizer, I jumped on my phone and immediately bought two tickets to the final showing on the coming Wednesday night. The hummus and wine were chased with some water and the night was rounded off by a bowl of pistachio ice cream. So, fast forward to Wednesday. Mom already had the day off and I hightailed it out of work that afternoon, on time for a change. I wore my Labyrinth t-shirt which I received in a Loot Crate subscription box–I literally subscribed for just that month because of there being a Labyrinth item and cancelled right after. I would have loved to keep going; Loot Crate has some great stuff, however it is not in the budget currently. But I digress…We arrived just in time to grab our seats in the second row, which normally would be less than optimal. But this theater, like most of the renovated AMC Theaters, had reclining seats. So we quickly settled in with our feet up to watch the movie.

Just before the start of the film, Fathom Events premiered a short documentary with some behind-the-scenes footage and interviews. The recent passing of David Bowie earlier this year did add a slight tinge of sadness to the viewing. But the documentary shed light on his personality and behavior while working on the film. The interviews were conducted with Brian Henson (Jim Henson’s son) and Jennifer Connolly (Sarah in Labyrinth). Both discussed David Bowie in such friendly terms, Brian adding that his father and Bowie shared the same naughty sense of humor. It was also mentioned that the long hours on set were no problem for Bowie, who was used to long hours during tours. He loved to work, but also enjoyed spending time with Jim and the rest of the cast and crew in the studio pub. The rest of the documentary was spent in discussing Jennifer Connolly’s experiences as a 14 year old being in a movie, in London, for the first time. In addition, a small portion was dedicated to the museum where a large portion of Jim Henson’s puppet collection is housed and where they have restored quite a few of the Labyrinth puppets. I would love to go to this museum at some point in the future. The documentary ended and the movie began. The opening credits rolled and the music started immediately followed by the introduction of the main character, Sarah. It’s not long until you’re introduced to the movie’s male lead, the late David Bowie as Goblin King Jareth. If you’re as much a fan of Labyrinth as I am, you have the movie memorized and every song sparks an involuntary need to sing along–quietly, naturally, even if the seat to my left was empty. The movie soundtrack was written and performed equally by David Bowie and Trevor Jones, each with 6 songs on the 12 song soundtrack. 5 of Bowie’s 6 songs feature him as the lead vocal (2 versions of Underground, Magic Dance, As the World Falls Down, Within You), the sixth, “Chilly Down”, he sung backup to the movie’s voice actors of the fire creatures in that scene. Another fun fact regarding the soundtrack, the album had Luther Vandross, Chaka Khan, and Cissy Houston (Whitney Houston’s mother) as background vocalists.

This was my first time seeing the movie in a theater, as it had first premiered 30 years ago. But to my surprise, there were people in the audience seeing the movie for the first time. Now, I can’t be certain, I didn’t go around surveying people on the subject. You can just sort of tell. Audible sounds of surprise or laughter at scenes that would not necessarily elicit the same responses from people who had worn out their VHS tapes. It was a great environment though and everyone thoroughly enjoyed the film. You could also easily pick out the long-time fans by the Labyrinth-themed t-shirts they wore (yours truly included) or the full costumes they had made. There was one family who cosplayed as Sarah, Jareth, and Toby. The husband was Sarah in the white dress from the ballroom scene, his wife was Jareth from the Magic Dance scene and their adorable baby was dressed as Toby in the same striped onesie. The wife also made sure that her Jareth cosplay included the infamous bulge in her tights. They looked perfect and everyone wanted a picture. After the movie had ended, I spent some time chatting with a group of fans, while I waited for mom who had gone to the bathroom. Then it was time to go home.

Overall, it was a great evening full of nostalgia and well worth all the driving that took place. I guess the only thing I would change, that I have no control over anyway, is to have more theaters play the movie. One theater in the greater Phoenix area was definitely not enough. So how about keeping that in mind for future 30th anniversaries Fathom Events?