PodtoberFest with 7 Days A Geek 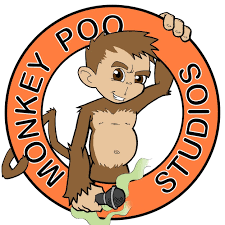 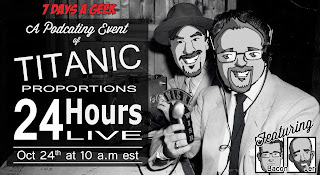 This past weekend, from Saturday 10am EST until Sunday 10am EST, the 7 Days A Geek live 24 hour PodtoberFest took place.

What started as a less than serious suggestion in the after-show of a regular Friday night live show–from Bill Sweeney podcast host and friend(The Wicked Theory Podcast)–quickly turned into a full fledged collaborative team project. Jason “The Angry Ginger” along with his co-host Grant immediately embraced the idea of running a 24 hour live show of their podcast, both to drum up content for their 30 days of Podcasting fundraiser in November and to just see if they could pull it off. Bill, the instigator, was roped in to head up the writing team responsible for coming up with enough content to fill 24 hours and then some. The rest of the writer’s room comprised of: Jason aka Agent Palmer (www.agentpalmer.com), myself, The Tech Support, Road, Daisey. Also assisting Jay and Grant with securing guests during the show, was Jay’s friend and producer Althea.

For the past month or so, we had been hard at work with organizing content for two 3-hour morning shows sandwiching 18 individually themed hours. Skype and Google hangout meetings were held, minute details were discussed and plans with backup plans were created. 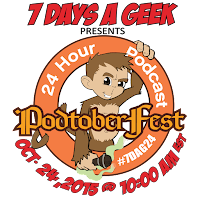 We each used our individual talents to turn this idea into a reality and I feel both privileged and proud to have been a part of it.

The show was not without its minor hiccups, which is expected for a live online hosted show, but was otherwise a roaring success. Bill, Palmer, and I all committed to staying awake for the entire  24 hours, in order to assist with production and to support Jay and Grant. Bill even flew from Staten Island, NY to Grand Rapids, MI to be “in studio” with Jay and Grant. Palmer and I joined in remotely, from our respective laptops.
This is a good moment for a side tangent about my laptop. I got home after work and a trip to the grocery store on Friday night, to find my laptop doesn’t want to turn on. I try several times to get it to function all to no avail. I immediately reach out to friends on Facebook asking if anyone will lend me a laptop for the weekend, I knew that without a laptop it would severely cripple my ability to help with the Podcast. I never panicked, one because I don’t ever panic about anything. Two, I knew that worst case scenario, I would be unable to actively help with the podcast, but could still listen on my phone. While that would have been a bummer, it would still have been better than nothing. Luckily, everything worked out and I wound up with an awesome new laptop. But back to the main point, PodtoberFest.

The morning show started off with the hosts (Jason and Grant) discussing the idea and creation of the 24 hour podcast. They also took some time to introduce their sponsors. Bill, originally producer, quickly took on the role of co-host as time progressed. It’s hard not to when there’s a microphone near your face. Although sometimes, it would have been helpful to Palmer and I if a chat window or a phone had been close to Bill’s face. It certainly would have made getting a hold of him a lot easier, but we forgave him. There was a lot going on. 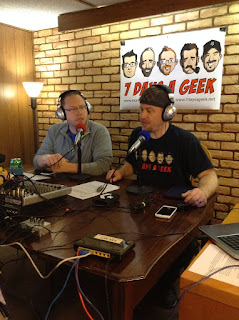 With 18 different themed hours full of discussion topics, games, and sponsor promos–there was never a dull moment. In fact, there was more than enough content to fill the 24 hours. Fellow remote producer and writer Palmer actually calculated that at the end of the show there was still at least another 12 hours of unused content left over. It had been the goal to come up with more than enough stuff for the show in case there were any moments were a topic fell short or there was dead air. But, luckily, that rarely happened and there was only one hour where things didn’t quite go according to plan. Games involving sounds is something to improve on for the future.

Twitter was a huge focus during the show, everyone with a Twitter account was sharing the show and promoting it, in an effort to increase listenership. Mixlr even let you send out tweet through the chat room hat provided a direct link for people to access the show as it went along. A cool and really exciting (Twitter related) thing to happen during the show was discovering that the hashtag PodtoberFest (#PodtoberFest) was trending on Twitter. What that means, for those of you not hip on the Twitter verse, Twitter hashtags are a means to track popular topics and search through the ocean of tweets for related tweet on the same topic. Basically, whenever a hash tag is used, someone can type in that hashtag and Twitter will pull up all tweets containing that hashtag. Once a hash tag is used repeatedly and continuously, it begins to “trend”, meaning a lot of people are either looking up that hashtag or using the hastag. Sometimes across the country and even the world. Twitter will then put out the list of trending hashtags that are popular for that day in the country and the world.

Nearly halfway through the 24 hours and after the live reading of Sidekicked the radio play (written by Jason the Angry Ginger), Jason was checking his Twitter and excitedly revealed on air that PodtoberFest was trending on Twitter above Jessica Jones. Jessica Jones is the new Marvel/Netflix show who’s trailer premiered that same day. So needless to say, it was pretty cool to hear that we were basically beating the Jessica Jones hashtag for popularity.

I must admit, staying up for 24 hours was easier than I thought it would be. I did have it a bit easier than the guys did; instead of 10am to 10am, I only needed to stay awake from 7am to 7am. Being three hours behind the rest of the crew helped in that aspect at least. It wasn’t hard to notice the point when sleep deprivation and caffeine overload took their toll around the 20 hour mark. But thanks to time spent with late addition guests (Matt from Reasons Are Several Podcast and Dave from Podcasts without Borders), the boys found themselves rejuvenated enough to knock out the last few hours of the podcast, the second morning show. With that, the 24 hour live podcast was over and the rest is history, as they say. The boys broke down all the equipment and went to sleep at some point, while I was in bed at half past 7 ready to catch up on some glorious sleep.

Now it would be a remiss, if I did not give a special shout out to the unsung hero of this endeavor–Grant’s wife Beth. Not only did she allow all the shenanigans to take place in her basement, but she also spent a lot of time in the kitchen prior to and during the 24 hour broadcast. She was the only one in the house to get some sleep that night, but it was well deserved. Beth made sure the boys were well fed and hydrated in order to keep going. She even ensured that Jay had a birthday cake at midnight. Out of everyone involved, they could not have pulled this off without her. 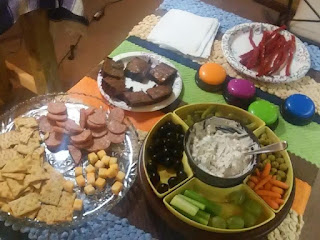 Now, I bet you’re asking, how do I listen to this epic 24 hour podcast? Well, you’re in luck. All 24 hours of PodtoberFest will be released in hour segments, during the month of November, for 7 Days A Geek’s 30 Days of Podcasting. Normally, during the 30 Days of Podcasting, Jay would release short daily episodes in an effort to gain Patreon support to help keep the podcast going. This year, thanks to PodtoberFest the majority of the content is taken care of, plus anyone who was not able to tune in on the 24th will be able to hear everything they missed…or relive it all over again. I know I will be. Enjoy and while you’re at it, check out the 7 Days A Geek website, s7evendaysageek and Monkey Poo Studios.