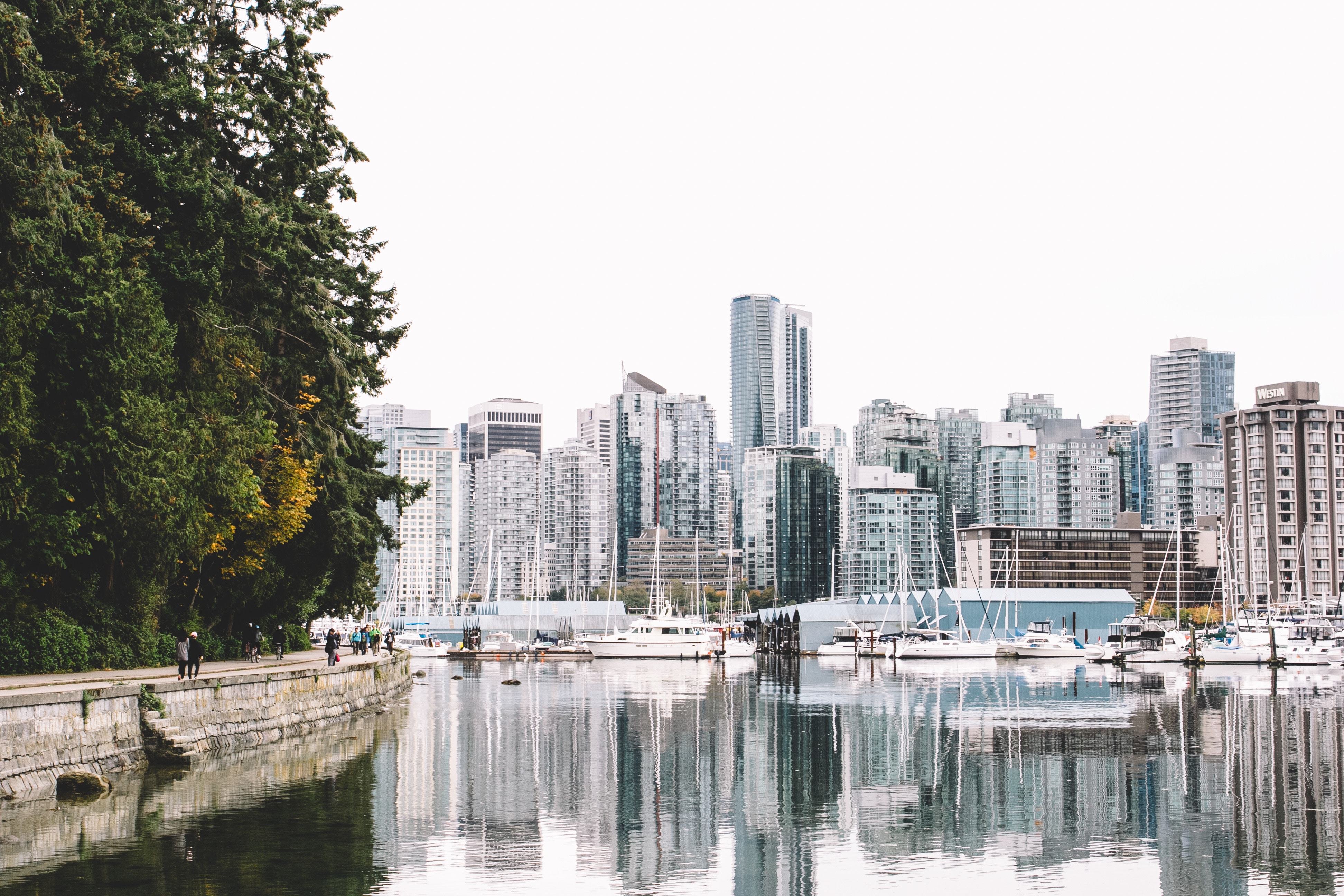 Back in August, I returned home from one of the most gorgeous places, if not the most gorgeous place I have ever been to in North America. Vancouver, British Columbia–the western coastal city in Canada. Nestled amongst the mountains and ocean bays just to the north of the American border of Washington state. It’s unique beauty derived not just from the city itself but also the diverse surrounding areas. It’s no wonder that Vancouver is a popular location for film studios. Tall pine forests, flowing rivers, mighty mountain ranges cutting through the clouds. I never would have expected to fall in love with a place so quickly and so completely.

I now understand why my friend Lucy is trying so hard to get permanent residency and continue to live in this amazing city instead of returning to her native country of England. I would emigrate to Canada in a heartbeat if I had guaranteed work in Vancouver and it wasn’t so damn difficult. But alas, as much as I would love it, I rather prefer being further east than moving further west. Heading to the East Coast has been an ambition for a long time and something I hope to accomplish eventually. Airplane tickets to Germany would be so much cheaper…but I digress.
I flew into Vancouver on Tuesday August 25th, by way of LAX (Los Angeles). Longest layover ever, literally. I’ve never before spent over six hours at an airport. It was rough, but considering I got my flight for free (I used mileage points) I couldn’t complain. The flight from LA to Vancouver I was originally supposed to take–at around 1pm– was cancelled. I was left stranded from 11am until 5pm, when I could finally take the next flight. I tried to keep myself occupied with my phone and a book to read but the worst part was the uncomfortable seating. The best part was the good music floating over from the bar in the corner of the terminal. I arrived in Vancouver at just after 7pm . I took a taxi from the airport to my hotel and met up with my friend Sandra. Despite being exhausted, we went out in search of dinner and took the first fast food restaurant we could find–Wendy’s.
Now being in Canada, this Wendy’s naturally served bacon covered poutine (fries with gravy and cheese curds); I was excited but my friend Sandy was not impressed. It was every where, not surprising, it is Canada. There were Ruffles poutine flavored chips at Subway, the fast-food version (not bad, but I’ve had better in America) at Wendy’s, a delicious were-chicken version at The Stormcrow Tavern. No, it wasn’t actual were-chicken, that’s just one of the awesome titles that the Stormcrow uses for their dishes. It’s the greatest geeky tavern I have had the fortune to eat in. There are geeky references galore: sci-fi, fantasy, pop-culture. You can drink beer, eat and play games. You can even roll dice for shots and take a chance at winning a shot glass. I would live in that place.
Our first full day, Wednesday, we took the bus to Stanley Park and spent most of the day at the Vancouver Aquarium. It wasn’t cheap to get in, but once you paid you got a stamp that allowed you to leave and re-enter if you wanted. We took lots of photos: fish, jelly fish, dolphins, otters. The otters were probably the most interesting and cutest things in the entire aquarium. The 4D Experience about prehistoric ocean dwelling dinosaurs was really cool as well and I highly recommend waiting in line to get into the theater for that one, if you ever find yourself in Vancouver.

After the aquarium, we wandered through Stanley Park down to the sea wall. The sea wall is literally what the name says, a rock wall along the bay that you can walk or bike along and enjoy the ocean. We took the sea wall out of the park to the city, walking back to the hotel instead of taking the bus again. We discovered when we took the bus earlier that day, it was a walk-able distance. We saved five dollars and enjoyed an easy and pleasant stroll.

Thursday we took a trip to Granville Island, off a recommendation from our friend Lucy. This involved another (this time longer) bus ride; we spent the day walking around checking out a bunch of little stores and a very large indoor market full of mom and pop food vendors. Tasty fish and chips (or fries) were eaten followed up by gelato. I also did a bit of souvenir shopping for myself and family. After the bus ride back to the hotel, we took a rest and later went to the convention center so Sandy could register for the Salute to Supernatural Convention. Part B to our trip was the convention, while Part A was doing the tourist thing and wandering around Vancouver. I and our friend Lucy waited until the next morning to register because we were lower levels of admission and didn’t feel like waiting until late at night in a long line. There would be enough waiting in long lines through out the weekend.

The first day of the convention rolled around and we were up early in the morning on Friday, ready to face a day of panels and photos. The panels were all great and entertaining as is usual for Supernatural cast panels, which I have only experienced in person twice (two conventions including Vancouver, the other here in Phoenix) and seen in many YouTube videos. The cast is a group of funny, humble, just awesome people who enjoy speaking to the fans as much as they enjoyed or enjoy working on the show. The conventions are known for including actors that have already left the show but are still just as popular, if not more, with the fans as they were when filming the show. A prime example: Richard Speight Jr. He was in five episodes of Supernatural in the entire 10 year run, but he has become a fan favorite for his lively and entertaining MC-ing of every single Salute to Supernatural Convention. He introduces every actor, opens and closes the convention, and is a master of Friday Night Karaoke.

Similar to Rich, Rob Benedict has also been at nearly every convention. He is known for playing Chuck (with hints of him being God) in the show, Supernatural. He and his band Louden Swain have performed as house band for the conventions and he assists with MC-ing duties. These actors have not had much to do with the show in these past years but they come to these conventions and fans love them for it and they are not the only ones, proving that a character and actor can have an impact regardless of how long they are part of a show.

The day ended with the big karaoke show. The sign-up line was massive and I braved it only to not have the opportunity to sing, but that is often the case. So many people sign-up and then attendees are chosen at random to be sprinkled in with a lot of the cast: Rob and Rich, Gil McKinney, Erica Carroll with Ruth Connell, Theo Devaney, Osric Chow, Tyler Johnston, plus special guest Brianna Buckmaster. She was the life of the party and hadn’t even been officially invited to the convention. She was invited by Rob and Rich. It was an awesome evening spent cheering and singing along with every single song until my throat bled (no, not really, but the vocal chords were angry the next day). Man I love karaoke.

Saturday, we slept in a bit. Karaoke-ing the night away will do that. By the time we were ready and had grabbed breakfast (delicious bacon breakfast wraps from Tim Hortons), we had missed a couple panels. But since we were having photos with both actors and one was having another panel on Sunday, we didn’t feel as bad about missing them that morning. The rest of Saturday was a blur of panels, autographs and waiting in line for photos. Food was eaten at some point, which is a luxury at a convention, because it’s not always a guarantee to have time to eat. Especially if you have jam-packed your schedule to the max. We ended the day with the Saturday Night Special, the Louden Swain Concert. Rob Benedict and his band mates: Billy Moran, Michael Borja, and Stephen Norton; played a fantastic show for the crowd, at times joined by special guests. The real kicker was Jensen Ackles (Dean Winchester in Supernatural) showing up to sing Simple Man by Lynyrd Skynyrd, and rocking the pants off that song (and possibly some fans as well). That was also another night of cheering and singing along followed by a walk in the rain sharing a single umbrella. There was a lot of giggling on the way back to the hotel. Not because we’d been drinking, but it was the type of giddiness you get when you’re tired but also brimming with so much energy at the same time. Plus, when you’re trying to share an umbrella with someone shorter than you, it’s hard not to find reasons to giggle.

Sunday I got to sleep in while my friend Sandy went to the exclusive morning panel. I was general admission, so I did not need to show up as early. I did have a photo that morning so I didn’t sleep in a great deal longer than the day before. I also stopped and grabbed breakfast which I ate waiting in the giant line to get in. I found Sandy shortly after entering the main area where the panels were being held, so she could eat her breakfast. Then we waiting until our numbers were called for photos. It was a lot of waiting through out the morning along with the big panel with Jensen Ackles and Jared Padalecki (Sam Winchester) and another panel with Ruth Connell (Rowena). I think there was a final video contest and an auction as well. But that was basically everything wrapping up for Sunday. Overall, the convention was a lot of fun, more so for the friends that I met (some for the first time, others again) and got to spend the weekend with.

The convention ending was not the end to our adventures though. We purposely made sure to have a couple days after the convention ended to allow for more exploration of Vancouver and the surrounding areas. Our friend Lucy was wonderful enough to chauffeur us around to go location hunting for former Supernatural film locations. We all ate breakfast together at…you guessed it…Tim Hortons. We drove around, we took some photos and sought out several different locations, even though the weather was not so cooperative–it rained…a lot. We also had lunch at a filming location Boston Pizza aka Biggerson’s. It was a great time and a fun little adventure for the three of us. The over all trip will go down as one of my top three favorite trips, I’ve ever taken. So far at least, who knows what new adventures the future holds.

Photo by the Bialons on Unsplash