Get Right Into the Fight with The Brothers Jetstream: Leviathan 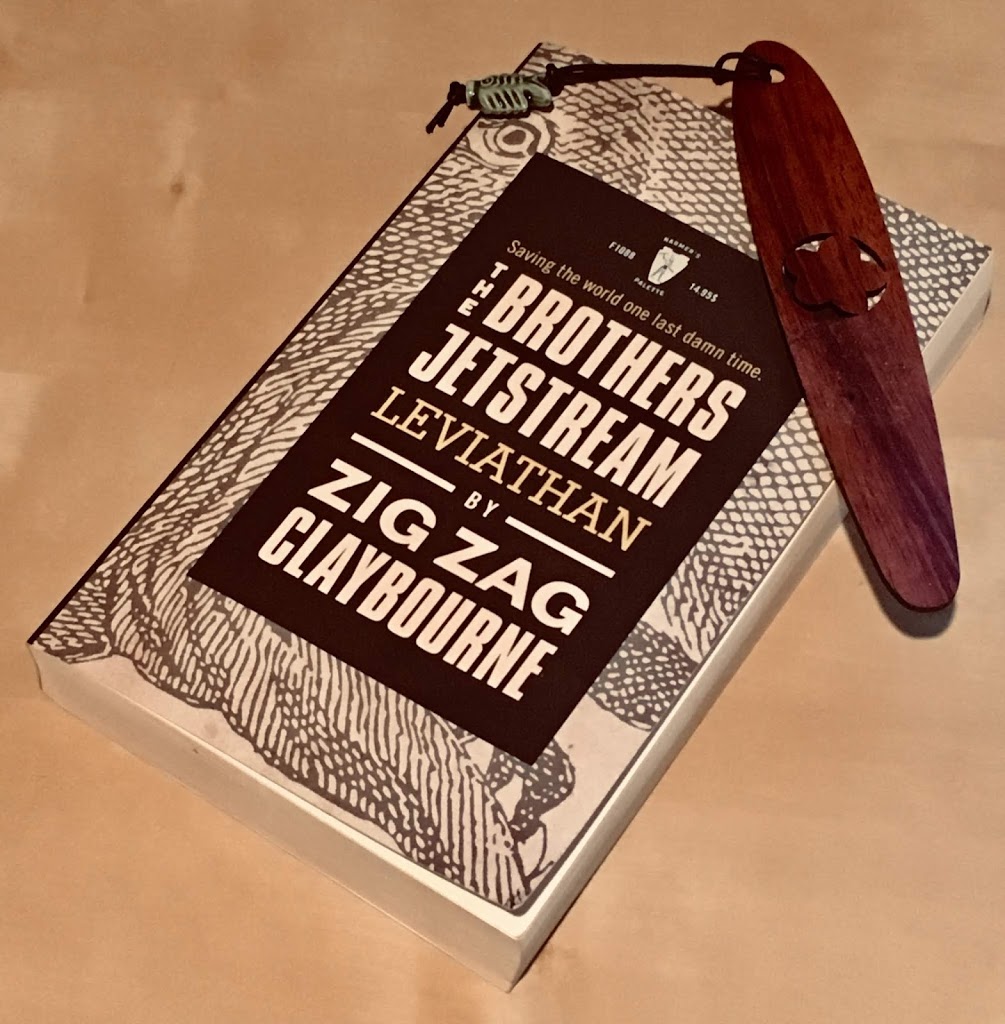 The Brothers Jetstream: Leviathan is a unique piece of Urban Fiction. I have read other pieces of Urban Fiction, and it is almost unfair to limit this novel to only that genre. The book is worthy of its own genre, although, I am not entirely sure what that genre is. It’s like nothing I’ve ever read. It’s fantasy, science fiction, urban fiction, and an abundance of pop culture. So, I guess it would be the Claybourne Genre.

With that being said, I enjoyed every moment of this book. Every twist and turn, every jump and jive, every…single…reference. It was at this convention that they invited Zig Zag Claybourne onto the podcast to talk with them about his work as an author and independent content creator.

From there, my co-host Henno heard about the Agnes Reign erotic fiction series and arranged to read and discuss them with my boyfriend. Our regular Gotham/Orville content was on break during the summer, and they thought it would be fun to get together and chat while I was away on vacation. I joined them for the second and third recordings after catching up and reading all three novellas, and it really was a lot of fun discussing them. You can listen to our discussions and reviews of “It’s Turning Purple, I Think We Should Quit,” “Orange: Peeled and Seeded,” and “Red Rover: Come Over” on the podcast. I guess what I’m trying to say is, if it had not been for a podcast in Michigan, my co-host, and my boyfriend, I may not have found and read The Brothers Jetstream: Leviathan.

So let’s get into it then shall we?

The Brothers Jetstream: Leviathan is about exactly that, brothers Milo and Ramses Jetstream and a giant ocean dwelling leviathan. While the brothers are the main characters of the novel, you also have a villain, and literally a wide assortment of characters. There are angels, vampires, djinn, psychics, shadowy organizations, whales, dragoons and even Adam and Eve. Then there are the different locations or settings for the book, from Detroit and a cruise ship, to the Philippines and even Atlantis. Yes, the mythical lost city of Atlantis, only in this book, Atlantis is not lost and not composed of just one city.

The main plotline of the story revolves around the brothers’ (and more specifically Milo’s) goal at hunting down the False Prophet Buford. You get the history of a previous fight gone wrong where Buford managed to escape from the brothers and their team, and they have been searching the world to find him. But it’s so much more than that, you get the sense that the brothers have spent their lives fighting the evils of the world (not unlike another pair of attractive supernatural brothers), like Buford, using their powers and those of their friends.

Some of their known associates include the Brothers Grimm, Bruce Weyne and Tony Sterk. And yes, those last two are misspelled on purpose. When I came across the first one, I reached out to the author on twitter to confirm. What a clever way to reference popular characters without incurring the wrath of copyright infringement. And yes, Zig Zag Claybourne is very active on twitter and is wonderfully nice, just a really cool guy. Throughout the book the brothers are searching, not only for Buford, but for various members of their group, the Agents of Change. And because of the various locations and characters, you as the reader can find yourself crisscrossing the globe and jumping around from chapter to chapter. I read a review online where one person found this to be confusing, but I enjoyed the chaos of it. It felt true to the characters and their mystical abilities. I am not going to give away what powers the brothers or their friends possess, but suffice to say, with all the evil in the world you can’t blame them for not sticking with consumer air travel.

I could also appreciate that the book did not take time introducing a backstory for all of the characters. You receive a brief introduction to the Agents of Change and get introduced to them all along the way, as they meet up throughout the book. You understand who’s friend or foe without needing to know the details of how and when they met the brothers and how they came to their powers or abilities. You just get thrown right into the fight, just like the characters. I have read books in the past that spend so much time character building and setting the scene, you begin to wonder if and when it will get to the point. Not the case with a Claybourne novel, it gets you straight to the point.

Another fun thing worth mentioning about this book, are the interims.  I’ve not seen an interim used in a book before. Between chapters 19 and 20, there is a two part Interim, almost like an intermission in a play. Only these interims pertain to the story. Then later, you are treated to Interims 3,4,5 all together on two pages, between chapters 24 and 25, giving you a short and simple check-in on three of the characters. They are all too short to be chapters, but separate enough from what is going on in the story at that point to warrant their own section.

So to wrap things up, just in case you need further incentive, here are some of the references that I loved:

“…and the parties headed out split per vehicle toward the first star they saw on the right, which was the setting sun, and straight on till morning.”

“You know the song where Bowie says, ‘This ain’t rock and roll, this is genocide’?”

“Neon inventoried: she was in a parking lot holding a modified white Beretta off a priest, which she’d used to shoot at some shiftless mofos while this cute broheem from the Department of Homeland Security went all medieval on Ann Coulter’s sister…”

“He faced Aileen Stone (not her last name) with the bravado of seven Six Sigma completions, albeit humbling his eye contact with the proper conciliation.” A book that can find a way to reference Six Sigma in an accurate business sense, both surprises and amuses me. It’s just so unexpected, I didn’t even think Six Sigma was that big anymore.

“It was rather fun interrupting Leviathan, like playing a mental game of Words with Friends.”

“We might have needed a bigger boat, thought Eve.”

Now, I know I have not given away very much, and purposefully so. But if anything of what I said has intrigued you in the slightest, pick up this novel and give it a try. It truly was a fun read.